Our year-end fundraising campaign is going strong! This year, The Greenbaum Foundation will match every gift received, which means your impact will be instantly DOUBLED!

As a part of our campaign, we will spotlight different stories from Community Management Committees (CMCs) – democratically selected groups in each community trained in project development and management. CMCs plan and carry out local initiatives, laying the foundation for community-led change and ensuring the sustainability of the Tostan program. Contribute to sustainable development by donating today!

“With solidarity, all is possible,” explains the CMC Coordinator Lansanna Souhmah in Brika, a village in lower Guinea. Brika began the Community Empowerment Program (CEP) in 2004, one of the first villages to participate in Tostan’s program in Guinea.  Joined by neighboring villages, Brika participated in the first public declaration for the abandonment of female genital cutting (FGC) and child/forced marriage in Guinea on June 9, 2008. Since that day the Community Management Committee (CMC) has continued to champion human rights in Brika as well as mobilize support in other communities for social change. 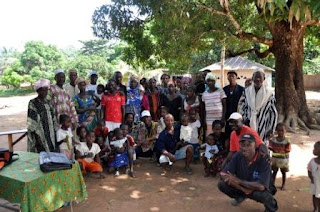 Education has completely transformed the residents of Brika. Like many early Tostan partner communities, Brika participants did not benefit from the literacy and project management modules that were later incorporated as core elements of Tostan’s CEP. Despite this, the CMC took the lead in establishing a learning center where, three times a week for the past several years, women and men have learned how to read and write in their national language.

Before the community of Brika began the CEP, community members did not send their children to school. Education was not a priority, especially because the nearest school was located too far away.  Although Brika is about a mile from the school in Tougnifily, children had to take a detour of nearly eight miles to cross the river that intersects the two communities. The CMC raised awareness about the importance of education for each and every child, and the community became determined to build a bridge so that the children could easily travel to and from school. Now, every child in Brika receives formal education. The CMC is even mobilizing once again to raise funds to reinforce the bridge, ensuring community access for years to come.

If you come across Brika children running across the bridge and ask them to tell you about their favorite subjects, you will hear girls’ answers filled with hope and ambition. They dream of becoming ambassadors, social workers, and even journalists. All of them recognize that their dreams would not be possible without education. And the adults in the community agree that by abandoning child/forced marriage, girls will stay in school and have brighter futures.

For many children from Brika, they will be the first in their families to complete formal education. For two junior high students, Mohammed Ali Camara and Abdoulaye Barry, schooling has opened the path for more opportunities. They, along with many others, have a strong will to attend school and relish in the fact that they will decide their own futures. 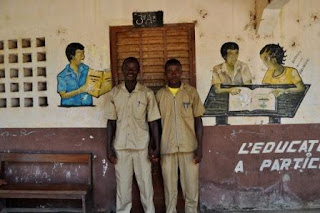 In countries where Tostan works, there are thousands of communities like Brika that have improved the lives of women, men, and children through their participation in Tostan’s proven model of nonformal education. The CEP reinforces human rights, while CMCs take the lead on development projects that promote the well-being of every woman, man, and child in the community.

Story and photos by Julie Dubois, Assistant to the National Coordinator, Tostan Guinea