Today, International Women’s Day, is a day to celebrate the power of women, in our lives and in our world. It is a day for all of us—men and women, old and young—to recognize the girls and women who every day support and transform us, and our families, communities, organizations, and societies.

Today at Tostan we are honoring women worldwide by remembering a truly special woman, Ayda Njaay. Ayda was a foundational member of the Tostan family, a long-time facilitator and educator. Sadly, after a battle with cancer, Ayda passed away this past December, but her life’s work and memory continue on after her.

In her honor, we at Tostan are dedicating International Women’s Day 2012 to Ayda, who is the embodiment of an empowered woman. 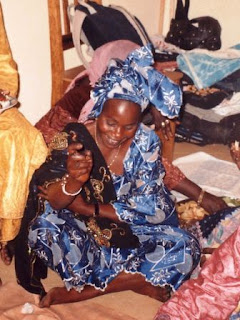 Wife to Abdul Karim Njaay and mother of seven, Ayda was born in 1967 in the village of Njaayan, Senegal. After her marriage, Ayda moved to her husband’s village of Saam Njaay, where in 1988 she participated in one of our early nonformal education programs. During this program, Ayda learned to read, write, and actively participate in discussions on human rights, health, and hygiene in a model that would later become Tostan’s Community Empowerment Program (CEP).

When I first met Ayda, I was drawn to her tenacity and self-initiative. She had so much energy! And you noticed it right away, partly because she was physically such a small person, but also because her positive, determined outlook was infectious.

During one of our early conversations, I asked about her life goals, and Ayda told me she dreamed of becoming a teacher so that she could share her recently acquired knowledge and further the development of her community and country. Once I heard this, I consulted with Ayda’s husband and the village chief of Saam Njaay and arranged for Ayda to work with me.

In 1992, Ayda became a Tostan facilitator, responsible for implementing our education program in a village. She led discussions on the Tostan modules, monitored activities, and helped organize social mobilization activities led by participants. For the past 20 years since her first training, her work and tireless dedication helped spread the three year Tostan program from her own village to others, including DarouToure, Kanene Diop, Ndipo Sao, Sao Mboulem, and Malicounda Bambara in three regions: Thiès, Kaolack and Louga.

Along the way, Ayda met with different government officials and dignitaries, including then-First Lady Hillary Rodham Clinton. Never discouraged by setbacks or challenges, Ayda was always at the forefront of our team, leading the way for other women and community members. Her willingness to help improve the lives of others was so contagious that it easily won over the support of her family and community and allowed her to work with a freedom and respect that is not always afforded to Senegalese women.

In 2007, Ayda experienced a strange pain in her chest that was originally diagnosed as a cyst and was told to go home. But a year later it was evident that it was much more. Sadly, Ayda found out that she had a tumor. After surgery and three years of fighting the cancer through radio and chemotherapy, her body finally succumbed.

It is hard to overstate Ayda’s legacy. She personally trained hundreds of women, girls, boys, and men; she also trained other Tostan team members who to this day are reaching hundreds more. She coached colleagues, welcomed visitors, and mentored gifted students.

Ayda’s husband Abdul knows of a more personal legacy, and he talks of a beautiful family who will follow in her footsteps. Their 16-year-old daughter Assa is in her fourth year of secondary school. She reads and writes in Wolof and French and hopes to join the military so that she can also help develop her country like her mother. Meanwhile their son, Maggey, is 17 years old and is in his third year of secondary school. He also reads and writes in Wolof and French and says he knows a bit of English too. He dreams of attending college.

While grieving the loss of Ayda, I heard so many Tostan colleagues use certain words to describe her: perseverant, courageous, bold, hardworking, and generous. For so many of us, Ayda became a living example of our mission to empower African communities, a figure of inspiration and hope to everyone with whom she worked.

Ayda, you were and are an inspiration to us all, and I can think of no better way to honor your life and work than to dedicate this International Women’s Day—a day about the power and dedication of women worldwide—to you, to the lives you changed, and to the bright and vibrant life you lived. May all of us at Tostan honor you by carrying on your tireless work for women, for our communities and societies, for peace and human dignity for all.

May the earth of Saam Njaay be light upon you.

A message from Molly Melching, Tostan Founder and Executive Director

Learn more about Tostan’s work and see the full article at our website.