In support of the Global Festival, we will post a story each week during the month of September featuring Tostan’s commitment to Millennium Development Goal 3 (MDG3), ‘Promoting Gender Equality and Empowering Women’ in the series MDG3 in Action. 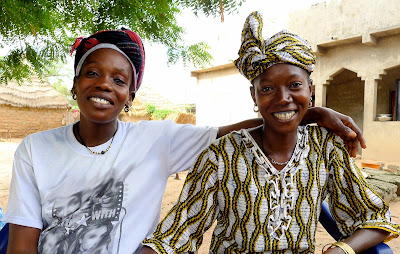 Khady Sow lives in the community of Kolma Peulh in western Senegal. Kolma Peulh participated in Tostan’s holistic Community Empowerment Program (CEP) from 2008 to 2011. Khady became a member of the Community Management Committee (CMC) shortly after the start of the CEP.

In every community where Tostan implements the CEP, a CMC is formed to coordinate activities in and out of the Tostan classroom. Composed of five commissions (health, environment, child protection, education, and income-generating activities), the CMC is a 17-member democratically-selected group that organizes awareness-raising events and leads development projects designed by the community. A minimum of nine of the members are women.

CMCs provide a structure, which often does not previously exist, from which woman can emerge as leaders and spearhead development initiatives in their communities. CMC members engage peers who are not part of the CMC, and women’s participation in community decision-making processes and development projects greatly increase as a result of the CMC.

Khady’s role as the CMC Health Commission Coordinator has provided her with an effective platform to lead health initiatives in Kolma Peulh.  A community health agent before the arrival of the Tostan program, Khady eagerly welcomed the creation of the CMC as a way for her to address persistent health risks in the community and garner support for new health initiatives. The Health Commission has used knowledge gained in the CEP’s health sessions to conduct awareness-raising activities related to child/forced marriage, malaria, diarrhea, family planning, medical visits, vaccinations, and latrine use.

In the case of malaria, Khady contacted the nurse from the health post several kilometers away, and now has all the necessary materials and know-how to conduct in-village malaria tests in Kolma Peulh. Thanks to the literacy component of the CEP, Khady now keeps written documentation of test results, filling out forms in her native language of Pulaar. To treat some of the most common illnesses in the community, she also organized the creation of a health closet, which ensures access to basic medication within Kolma Peulh.

The Health Commission has reached out to neighboring villages where Khady and her fellow Health Commission members now lead vaccination campaigns and coordinate with other local leaders to organize a variety of health, human rights, and education-related activities. For Khady, the next step for improving health in Kolma Peulh is to construct a simple health center in the village, making healthcare even more accessible to community members.

Through participation in the CEP, both men and women in communities like Kolma Peulh learn the importance of respecting human rights and welcoming female leadership to help reach community goals. Tostan’s non-formal education program empowers existing female leaders and facilitates the emergence of new ones by providing women with the knowledge and structures to lead initiatives in their communities.