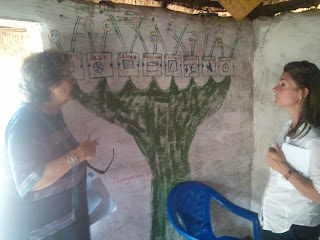 Molly Melching explains to Melinda Gates about how Tostan teaches reading, writing and cell phone use with the metaphor of a mango tree.

Melinda Gates of the Bill & Melinda Gates Foundation visited this small rural village in the Kaolack region of Senegal, West Africa on her way to London where she opened the Family Planning Summit 2012.

Ms. Gates spent three hours with women, men, and children of Kolma Peulh discussing the impact that empowering basic education can have on improving women’s health, particularly in the areas of family planning, female genital cutting (FGC), and child/forced marriage.

Throughout the visit, women confidently spoke out about these formerly taboo issues and explained how they had negotiated deep social change with their husbands, religious leaders, and neighboring communities, creating a broad consensus to end practices harmful to their health and that of their children. Community members from Kolma Peulh and neighboring villages are participating in the Tostan Community Empowerment Program (CEP), a three-year non-formal education program in national languages developed for those who have little or no access to formal schooling.

Ms. Gates was particularly interested in learning how social norms affect communities’ attitudes and behaviors and how the CEP provides a holistic framework for all community members to address issues on their own terms.

One man commented that when he learned about the negative consequences of women having children year after year he was keen to begin birth spacing in his own family.

“Before we were nearsighted. Nearsightedness of the eyes is bad, but nearsightedness of the heart is worse. We have now adopted practices that we know will lead to better health for women and children in the community and have ended practices that don’t. In the past, we felt we could never question traditional beliefs and didn’t have the right information and social support to change.”

Tostan Executive Director Molly Melching noted that the visit was well received by all involved.

“Tostan’s work is community-led and all of us at Tostan were thrilled that the people of Kolma Peulh had the opportunity to share their accomplishments, passion, and vision for the future with Ms. Gates, directly through an extended, open dialogue.”