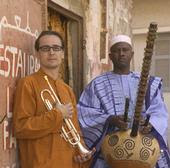 Performing in Washington, DC for the first time, Ablaye Cissoko and Volker Goetze visited the Tostan office before their show at Twins Jazz on March 10, 2010. On their first tour of the United States, the musicians follow a strict schedule, staying in Washington for only a few hours, before leaving again for Boston. This grueling schedule did not impact Cissoko and Goetze’s good mood, and they pleasantly discussed their background, their art, and their hopes for the future.

As Cissoko is part of the griot tradition from Senegal while Goetze is of German background, the two musicians seem at first glance to have nothing in common. However, one quickly realizes that is not the case, hearing them speak about their ever-growing friendship and musical collaboration. “We still don’t understand each other and are both strange to each other. I learn from him and he learns from me” says Volker Goetze. Their willingness to absorb new ideas and their fascination with each other’s music are what attracted the two artists to each other. “Our music is very much created in the moment. We don’t try to change our music to adapt to the other; we stay in our respective musical traditions and combine the two. This becomes a sort of meditation or trance.” This cross-cultural collaboration results in a fluid and peaceful type of music.

When asked about his background, Cissoko explains the West African griot tradition. Trained as an orator, lyricist, and musician, the griot keeps record of all the births, marriages, deaths, and cultural tradition through the generations of the family or village. Most prevalent in Senegal, Guinea, Guinea-Bissao, Burkina Faso, and Mauritania, the griot legacy stretches back for hundreds, sometimes thousands, of years.

“You do not become griot, you are born into it, and it is an important and full-time occupation” says Cissoko. Today, this tradition is still present but takes on a different shape. Griots nowadays often become djs or radio show hosts, incorporating other types of music such as jazz, blues, and rock into their music. Cissoko remains faithful to the tradition, accompanying his songs with a kora, a 21 string lute which sounds like a harp.

Blending beautifully with Cissoko’s singing and the tunes from his kora, Goetze adds jazzy trumpet music to the mix. Originally from Germany but now living in the United States, Goetze is of an entirely different background than that of his musical partner. Chosen in 2001 to be part of a musical exchange program for young musicians, he was invited to perform at the African-European Jazz Orchestra in Saint Louis, Senegal, alongside local artists. He speaks with emotion of his meeting with Cissoko and other musicians, explaining how enriching it was to be exposed to new types of music. Goetze hopes to one day implement exchange programs similar to the one he participated in, to introduce young musicians to new musical sensibilities.

Having come a long way since their meeting in 2001, Cissoko and Goetze released their first album in 2008 and are now promoting Sira, their second album. Learning of Tostan while in Senegal, the artists have since collaborated with the organization, lending their music to Tostan videos and short films, and mentioning the organization at every one of their performances. They also generously donate a percentage of their album sales to Tostan, helping Tostan support and empower local communities in Cissoko’s native country as well as other African countries. While visiting the Washington, DC office, the artists humbly reiterated their willingness to support Tostan in whatever way possible.