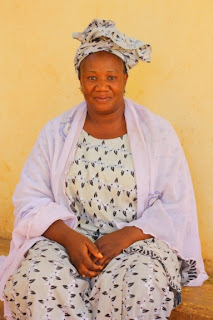 When Madame Dembele Mariam Touré took the Sotrama last week, something unexpected happened.  Sotramas are hollowed out green vans that serve as Mali’s public transportation system.  They are usually operated by a driver and a young apprentice who collects the $.35 fare from each 20 or more passengers inside.  However  on this day when the apprentice came to collect the fare from Madame Touré, a young girl on the Sotrama refused to let her pay. The fellow rider explained to the young man that Madame Touré was the community coordinator and insisted that if she had to pay, the young girl would pay for her.

Madame Touré is the respected and well-known Community Coordinator of Yorodjambougou, a rural village outside Mali’s capital Bamako. As someone who was never given the opportunity to complete her formal education, Madam Touré’s current leadership role within her community is something she never anticipated. According to Madame Touré, the basis of her success has been her new found access to education. As a participant in Tostan’s Community Empowerment Program (CEP), Madame Touré learned how to read, write, and do basic calculations for the first time. “I was a very good student, but education for girls was not a priority in my village,” she explains. In Mali, many girls are kept home to help with housework and watch younger siblings instead of going to school. As a result, most women are illiterate. This is something Madame Touré has worked hard to change in her community. After each Tostan class, Madame Touré reviews the lesson at her house with five to ten women who are unable to participate because of work or other obligations. “Before [Tostan] there was no communication among women in my village. Now the women learn and discuss together,” says Madame Touré.

The influence of the Tostan’s CEP has also enabled women to actively participate in community development discussions. Moreover, the classes have provided an opportunity for the community’s men to recognize the tangible benefits that come from educating women. “Before Tostan, women [in my village] weren’t allowed to make decisions or be educated because the men thought it would lead to bad things,” Madame Touré explains. Now, however, the men seem to better understand the added household benefits that come from educating women. According to Madame Touré, with education, women have learned how to start revenue generating activities that help support their families. “The women are now invested in creating revenue for their families and participating in economic decisions,” says Madame Touré.

Outside of these community-wide changes, big personal changes have also taken place for Madame Touré. As the community coordinator for Yorodjambougou, Madame Touré is directly involved in the development of her village. “Now people recognize me and respect me for the work I have done,” she explains with pride. Along with educating and inspiring other women, Madame Touré has lead health awareness activities and opened a women’s community fund.  Recognized by Tostan supervisors as one of the strongest participants, many more free Sotrama rides can be seen in her future.