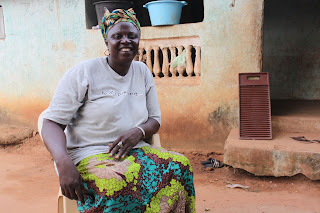 Mbamata Jawneh is a leader. Individual by individual, village by village, Mbamata is working towards a Gambia free of female genital cutting (FGC) and other harmful traditional practices. Mbamata is quick to express gratitude for the knowledge and skills she learned in Tostan’s human rights-based Community Empowerment Program (CEP), but it is clear that beyond her education, she also possesses a natural ability to lead. She has the tact, perseverance, and patience necessary to engage individuals in discussions about sensitive issues. These qualities have led her to achieve great things in her community, specifically to take a leading role in organizing social mobilization activities.

Mbamata was elected as Lady President of her community, Mane Kunda–a predominantly Mandinka suburb of the town of Basse in the Upper River Region (URR) of The Gambia. Her dynamism in this role made her an obvious candidate for the role of Community Management Committee (CMC) Coordinator, and when Tostan began implementation of the CEP in 2007, she was elected to the position. With the support of her colleagues and community, Mbamata facilitated a birth registration campaign, which registered over 360 children for birth certificates; she organized weekly cleaning activities, which got members to sweep clean the community of trash, animal droppings, and standing water; and she coordinated fundraising events and women’s discussion groups. Within a short time, Mbamata demonstrated to her community that she is an active and formidable proponent for change in Mane Kunda.

Possibly most notable, though, is Mbamata’s commitment to share the knowledge she has gained with her community and thereby live the Mandinka saying, ‘karang kabarra,’ meaning ‘practice what you know.’ In doing this, Mbamata also holds true to Tostan’s fundamental goal: to train communities with the skills necessary to lead locally-driven change.

It was this drive that led Mbamata to form the first social mobilization team in The Gambia. Mbamata recognized the need to systematically engage interconnected villages in discussions about key topics, such as FGC. This process of information-sharing throughout social networks is what Tostan calls organized diffusion. Inspired by her passion to bring about the complete abandonment of FGC, Mbamata formed a group of nine committed individuals who meet and discuss important social and health issues with community members throughout their village’s established social network. 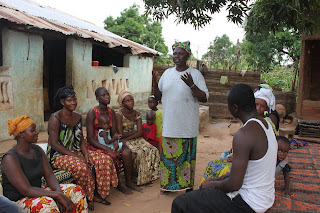 Speaking candidly during one of her team’s visits to a neighboring community, Mbamata explained, ‘‘FGC should be abandoned because all the motives that lead us to practice it are not achieved. It does not prevent girls from being sexually active. It is not associated with Islam and it brings huge health complications.’’

In their efforts, Mbamata’s team began by approaching 25 communities and then expanded their reach to include an additional 40 neighboring villages. She is now the Social Mobilization Coordinator for three teams in the URR: a Mandinka, a Fula, and a Serahule mobilization team, each of which specialize in outreach to their respective ethnic groups.

“We approach communities with patience and we listen and speak to them,” said Mbamata in explaining her approach. “When there is resistance, we encourage individuals from the community who are supportive to speak to those who are opposed to what we have to say. The change comes from within.’’

Thanks to Mbamata and her teams’ efforts, a public declaration for the abandonment of FGC and child/forced marriage was held in June 2011. With over 1,800 participants from 117 communities in attendance, the event marked a huge success in the movement for positive social change. Mbamata is proud of her teams’ achievements, but is continually looking for ways to help her community progress even further. ‘‘We need to motivate,” she says, “with motivation many things [can] happen in the future.’’

Ever the optimist, when one of Mbamata’s teams meets with resistance in a community, she remembers what it is that inspired her to start the work in the first place: ‘‘a desire to see the future of the nation prosper…better health and better education will make a better Gambia.’’

Photos by Elizabeth Loveday, Tostan Regional Volunteer in The Gambia