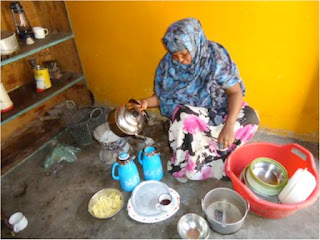 My name is Ubah Abdilahi Hirsi. I am 48-years-old and I live in Daami, a village in Somaliland. I participated in Tostan’s Community Empowerment Program (CEP) from 2007 to 2010. I am the oldest of eight children and when I was young, my father, a traditional carpenter of the village, could not afford to send me to school. Despite having no formal education, I worked very hard to open my own restaurant selling cups of tea and sandwiches. Every morning, I have to walk five kilometers to be at my restaurant before opening at 5:00 am – doing all the work in order to provide for my husband and seven children.

I first learned of Tostan’s CEP when other women and girls were talking about the program in my village. At first, I did not think I would have time for the classes as my restaurant was the only source of income for my family. But even under difficult circumstances, I had such a strong desire to attend that I set aside two hours in the afternoon for Tostan classes. Before Tostan, I did not know my human rights, but now, thanks to the classes, I have rediscovered how to smile and find happiness in my job and home.

Like many places in Somaliland, there was a belief in Daami that women did not need to go to school. Tostan’s CEP showed me and other women that education is just as much our right as it is a man’s right. I soon realized that when women and girls received education, social change began to unfold in my community. The first change happened within my own household when I began discussing what I learned in the Tostan classes with my uncle – he listened and respected my advice.  Family management became a joint effort for us, which in turn created a more positive family environment.

Within the community as a whole, women and girls united together to bring positive social reforms. Tostan helped us change ourselves and helped us push others towards positive change. Now, I have a better understanding of birth spacing and good nutrition for children, which has helped to decrease the number of malnourished children in my village. The community also experienced profound changes in regards to female genital cutting (FGC). I now understand the damaging health consequences of FGC on young girls, which is why I chose not to have it practiced on my daughter who was born one year after I began Tostan classes. 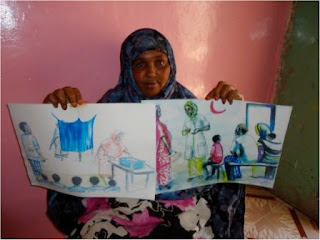 I also have a better understanding of my personal health and the importance of a clean home. I organized women and girls in the village into a group called Nanafada, which in Somali means to be clean and to clean your environment. Every weekend, I am joined by the women of Daami to sweep the village and share our knowledge of health and hygiene with other women who cannot attend Tostan classes. In cleaning the village, we have created a safer environment with cleaner food and homes and with less waste around the village.

Before Tostan’s classes, I worried that I would only be a restaurant worker. Now, I happily promote the cleanliness and well-being of the community members in Daami. I believe the most effective way to create lasting change is by engaging other women and girls in my community; the CEP gave me the tools to do that.

There is a Somali proverb: “if you educate a man, you only educate one person. But if you educate women, you educate an entire society.” I know now that women are an important element of development, and I would like to ask Tostan to make more classes available so that all communities can benefit from this program.

Ubah Abdilahi Hirsi was a Tostan participant in Somaliland. Her community of Daami completed Tostan’s holistic human rights-based education program, the Community Empowerment Program (CEP), in 2010. In this interview with the former National Coordinator of Tostan Somalia, Oumar Name, Ubah describes the positive changes she has seen in her family and community since her participation.Mouhamed Abdi, former Assistant to the National Coordinator at Tostan Somalia, translated this interview.