Through our work we have learned that as communities become empowered through human rights-based education, their ability to empower girls amplifies. In celebration of the first ever International Day of the Girl—11 October 2012—we are sharing the inspiring stories of five girls as they pursue their goals and build an empowered future for themselves and their communities in our blog series, Spotlight on Girls 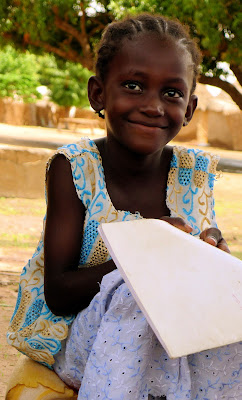 During my visit, community members were eager to share how community learning has influenced Kolma Peulh. They highlighted examples such as: the active involvement of women and adolescents in decision making;increased priority on child health and the creation of a health closet; the abandonment of child/forced marriage; and a new commitment to schooling for girls and boys. With women and men of all ages ready to talk about Tostan’s work in Kolma Peulh, we stayed up late into the night, sharing stories and songs as I scribbled down notes by candlelight.

One of the highlights of my stay was a conversation with a young girl, Aissata Ba. When I asked her if she would like to talk to me about herself and her life in Kolma Peulh, she smiled unassumingly and nodded, and the conversation (translated from Pulaar to French) began. 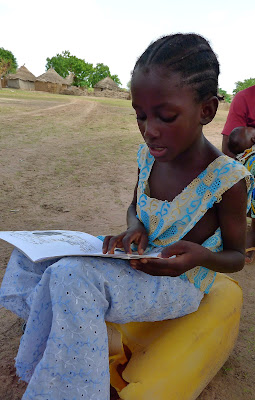 Anna: (after introducing myself) A lot of people in Senegal and around the world are interested in what is happening in Kolma Peulh. Could you introduce yourself to them?

Aissata: My name is Aissata Ba, from Kolma Peulh. I am six years old. My mother is Aminata Ba – you spoke to her yesterday.

Anna: Oh yes. I think she said that you will be going to school next year for the first time, right? Are you excited?

Aissata: I’m signed up to start in a few months and I can’t wait! My mother and a lot of her friends learned how to read [in Pulaar during Tostan classes], so they have already been teaching me to read the Tostan picture books. My favorite one is about an antelope who works very hard to cook dinner. But I’ve read all of them now and the older children say that there are lots of new things to read at the school. There will be so much to learn there and I already have a bit of a head start.

Anna: Is there a subject that you’re most excited to learn about?

Aissata: I don’t know how to add numbers or write words, so I’m excited to do that. Actually, I want to stay in school for as long as I can so that I can learn about everything. I’m going to be a teacher, or maybe a nurse, when I grow up, so I need to study all the school subjects.

Anna: Have you heard about or noticed any things that have recently changed for girls growing up in Kolma Peulh?

Aissata:There are more girls who go to school now, and my village has decided that girls can stay in school for as long as they want. My parents have told me the same thing and I always listen to them. They said that they will make sure that I don’t get married [before I finish high school]. I can decide when I want to get married. I want to stay in school for a long time, because you need to learn a lot of things before you become a teacher. I wantto be like my mother because she is now in charge of lots of decisions in Kolma Peulh. In my village now, people say that girls can do as much as boys, so I would like to show them that I can do a lot of things and can be a very good student.

Anna: I’m sure you’ll do a great job in school. Is there anything else you’d like to talk about? Do you have any questions for me?

Aissata: I liked the questions that you asked. I was wondering what you want to be when you grow up. I think you should be a writer because you write down lots of things very quickly. You could write new books for children like me who are going to school and I could read them.

Interview and photos by Anna Vanderkooy, Tostan Projects Assistant, Senegal
—–
Show your support for girls by sharing Aissata’s story with your friends and family! Looking for more? Read other Spotlight on Girls posts here.