Spotlight on Girls: The Marietou Law

Through our work we have learned that as communities become empowered through human rights-based education, their ability to empower girls amplifies. In celebration of the first ever International Day of the Girl—11 October 2012—we are sharing the inspiring stories of five girls as they pursue their goals and build an empowered future for themselves and their communities in our blog series, Spotlight on Girls.

Now let’s turn the spotlight on Marietou from Thiès, Senegal. 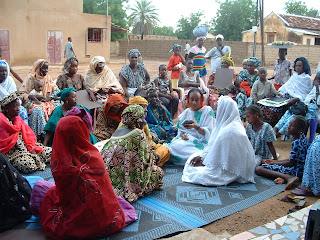 In 2002, I was a facilitator of Tostan’s human rights-based education program, the Community Empowerment Program (CEP), in the small district of Hersent in Thiès, Senegal. There, I saw a 15-year-old CEP participant named Marietou positively change the perception of domestic violence in her entire community.

At the age of four, Marietou’s father passed away, and she was forced to live with her stepfather who physically abused her mother every night. This abuse deeply affected her, but she felt she was not able to do anything about it but cry; she couldn’t intervene.

Years later, Marietou became a participant in Tostan’s Community Empowerment Program (CEP). After learning in class discussions about the importance of respecting and protecting the human rights of all people, she decided she had to do something to help her mother.  She could not take seeing her suffer any longer. She decided to talk to the district chief about it, but was disappointed by his reaction when he told her that children should not get involved with their parents’ business.

She thought then she must get more people’s attention in order to stop domestic violence in her community; she knew right away that she had to do something extraordinary that no one had ever done or seen before.

Empowered by her knowledge of human rights, Marietou headed to the community mosque all by herself so that she could bring up the issue of domestic violence to the imam and other important people in her community.

After the midday prayer, just about when people were ready to leave the mosque, Marietou politely said, “Can I please have your attention for just a second?”

All eyes turned to her; people were surprised that she, a young girl, had come to the mosque to talk to them. Everyone waited curiously to know what she had to say.

She asked the imam, “Did you know some of the people in this very mosque abuse their wives every single day? I’m curious to know: does Islam allow you to abuse your wife like some people I know (directly referring to her stepfather)? Did you know that all people have the right to be protected from domestic violence? Please, dear imam, do something to stop domestic violence in this neighborhood. If you don’t do anything and my stepfather keeps beating my mother, I will have to call the police on him and all the other men who do the same thing because I know who you are.”

At first everyone in the mosque started to laugh, but then all eyes shifted to her stepfather.

The imam gave everyone permission to leave the mosque except for Marietou and her stepfather. He sternly told him that Islam does not condone domestic violence. After sometime Marietou’s stepfather started to cry and vowed to never put his hands on Marietou’s mother again.

To enforce this collective decision, a law was implemented; they called it the Marietou Law. Marietou was also elected the coordinator of a new community watch committee to protect women and adolescent girls against domestic violence. She shared how glad she was that the imam and entire community became involved in helping to stop domestic violence.

Strengthened by the knowledge she gained through participation in the CEP and her own personal courage, Marietou emerged as a true champion of human rights. Now she does not need to worry about her mother or other women being abused in her community.

Show your support for girls by sharing Marietou’s story with your friends and family! Looking for more? Read other Spotlight on Girls posts here.