Tostan’s Binta Diao is an inspiring leader, a sensational speaker, and a dedicated development worker, devoting each day to empowering others. She also drives a pretty serious motorcycle. 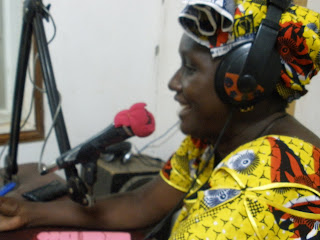 I recently returned from an incredible tour of Senegal, one that took the Volunteer Coordinator, her assistant, and myself to each regional Tostan office. We met with regional staff in six different areas and were given a special look into the community-led events that are driving sustainable development in Tostan villages across the country. An effective awareness raising initiative led by Tostan supervisors in each region is a kind of communication tool that I, occupying myself with online media, have never used: radio. Aimed at informing populations about important health, hygiene, and human rights issues, Tostan radio broadcasts are delivered in local languages during evening hours when entire families are home to tune in.

During our stay in the town of Kolda in the south of Senegal, I was lucky enough to meet an incredible woman by the name of Binta Diao, a Tostan supervisor in the Kolda region and an experienced radio announcer who has been leading awareness-raising campaigns via her thrice-weekly local radio show for eight years. Her dedication to community empowerment is clear: Binta rides her motorbike 80 kilometers from the Gambian border to conduct her broadcasts. Before becoming an announcer and a supervisor, responsible for overseeing Tostan’s Community Empowerment Program (CEP) in nine villages, she worked as a facilitator for seven years, teaching rural villagers about human rights, democracy, and literacy, among other subjects. She was also a participant in the CEP herself when the program was implemented in her native village in the late 1980’s. 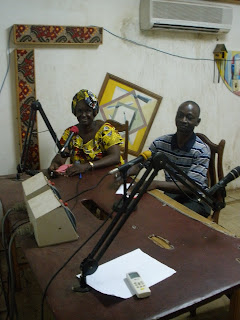 In the studio, I sat between Binta, dressed exquisitely in a bright yellow boubou, and her colleague Djabé Bathily, listening intently as the two spoke about malaria, the theme of the hour-long broadcast. While I couldn’t understand the words Binta spoke in Pulaar, I could clearly hear the passion in her voices as she addressed villagers and community members about malaria symptoms, treatments, and the importance of using mosquito nets. Posing questions to the audience, Binta turned the broadcast into a veritable discussion as over 15 people called in, adding their voices to the conversation. Other topics Binta covers on the air include Tostan activities in the various communities, recent events, and the subject that was her personal favorite as a CEP participant: human rights. Knowledge is a powerful tool, one that is empowering communities to create positive change with the help of dedicated supervisors like Binta, one radio show at a time.