The Tambadjiro Association and Social Mobilization 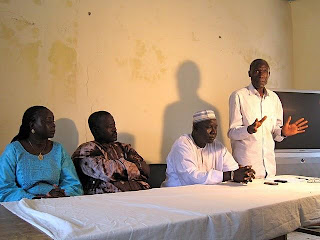 Social mobilization, spreading awareness of important issues through social networks, is exemplified in the activities of the Tambadjiro Association which met in April in Yeumbeul, an area just outside of Dakar. The group, supported by Tostan, holds meetings at ten different locations in the Dakar area and reinforces the lessons learned during Tostan’s Community Empowerment Program (CEP) through discussion, skits, and video screenings of “Walking the Path of Unity”, a film about FGC abandonment directed by the Senegalese community of Diégoune in partnership with Tostan and the NGO Respect.

Tostan’s CEP, a 30-month holistic education program implemented in villages across Africa teaches human rights, democracy, literacy, and health among other topics. Through social mobilization efforts the program helps to bring about sustainable development as community members take it upon themselves to teach friends, family, and even neighboring communities about human rights. The Tambadjiro Association has worked with Tostan since 2000.

The meeting held on Sunday, April 18 was attended by many important figures, including the mayor of Yeumbeul, the president of the Tambadjiro Association, Oussaynou Tamba, and a representative of Tostan, Rose Diop. Members of the surrounding communities also travelled to attend the event which served to raise awareness of FGC and child/ forced marriage. By directing social mobilization, meetings like those held by the Tambadjiro Association increase the impact of human rights education program and add momentum to the already powerful movement of communities standing up for their rights and voicing their desires to abandon harmful traditional practices.