Tostan at The World Social Forum

As delegates to the World Social Forum (WSF)—representatives from organizations as well as those simply interested ─ poured into Senegal from across the region and far beyond, the buzz in Dakar became palpable. While on a normal Monday morning at Cheikh Anta Diop University, the chatter of busy students might echo around campus in Wolof, French or any other of the Republic’s numerous spoken languages, on that Monday, 8th February 2011, Arabic, English, Spanish and Portuguese crowds joined their chorus, as delegates poured into the Forum. 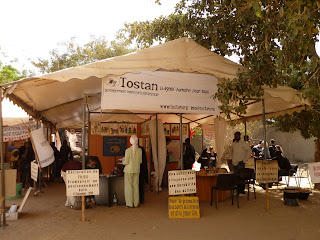 The gathering witnessed 75,000 participants from a widely diverse range of backgrounds and disciplines. South American journalists, French unionists and Palestinian women’s groups to name but a few of those represented were joined by myriad organizations from across Africa, small and large, the combination of which provided the backbone to the dynamic week.

WSF was set up a decade ago to act as an ideological counterbalance to the World Economic Forum that takes places annually in Davos, Switzerland at approximately the same time. This Swiss counterpart is often criticized for its capitalist, pro-globalization agenda, while WSF aims to create a space in which grassroots movements and humanitarian causes have a platform on which they may better promote their work. 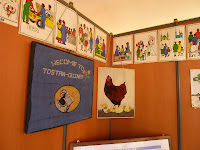 Tostan had a good-sized stand near the dining area that welcomed a strong flow of development enthusiasts throughout the week, many of whom were full from the array of Senegalese delicacies on offer around us that helped to create a lively atmosphere. This was added to by the spontaneous outpourings of music, dance and protest that almost hourly would spring to life and reverberate across the campus. 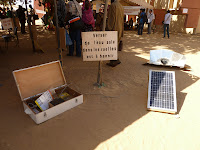 We lined our stand with pictures from the ‘image box’,’ a visual aid used by the facilitators of our Community Empowerment Program (CEP) to facilitate discussions of human rights amongst participants. As we explained to visitors, the CEP not only approaches the question of human rights and responsibilities, but also teaches numeracy, literacy and small-business management in 16 different national languages in our 8 national offices across Africa. In collaboration with UNICEF, Tostan’s innovative Jokko Initiative promotes skills learnt in the program through mobile phones and SMS text messaging, connecting even the most remote villages to the wider community. The Jokko solar suitcase Tostan exhibited drew throngs of curious local students, eager to learn more about the initiative. During our conversations we stressed that Tostan is primarily an organization that promotes sustainable, community-led education but also highlighted other projects such as our Child Protection Project and work in women’s prisons throughout the event. 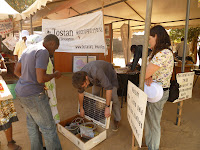 On several occasions, Tostan staff spoke with men and women for whom the organization meant more than the average passerby as they themselves had directly benefited from the implementation of the CEP in their village. None of us could promote our work better than these people whose lives had consequently been changed for the better. One engaging woman from Senegal’s southern Casamance region had completed the program and now works for a local women’s group promoting children’s education.

At the end of a tiring yet hugely satisfying week, Tostan spoke with countless passionate and engaging people keen to share ideas. We hope to build on the contact made and forge friendships from which our organization and communities will forever benefit.

Story by Will Schomburg, Tostan Communications Assistant in Dakar, Senegal