Traveling Is Learning: Abdoulie Sidibeh Reflects on His Experience at the Women in the World Conference in NYC 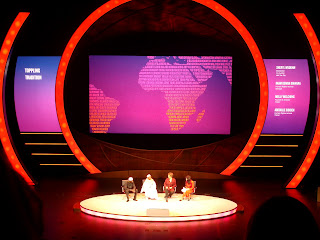 When asked to summarize his experience of the trip, Abdoulie quoted a Mandinka proverb, saying, “tamo mu karang le ti,” “traveling is learning.” Abdoulie’s personal mission when going to America was to learn and gain as much knowledge as possible to bring back to his community. Laughing, he shared that before he had the opportunity to go to America, his friends used to mock him for spending his afternoons sitting with “women as old as his mother” discussing human rights and health issues. But now, he said, they have realized what opportunities can be brought through education and they are eager to learn as well.

Abdoulie was invited to speak at the conference on Saturday, March 10, the same day that US Secretary of State Hillary Clinton delivered her call for women to commit to their own empowerment. Joining that call as a male advocate for women’s empowerment, Abdoulie felt honored and proud to be involved in such an important and prestigious event, “I am so happy and so proud. I was the only youth from the whole Tostan program and that made me so, so happy. I was glad meeting Hillary Clinton. I knew her name since Grade 6 and used to see her pictures.” 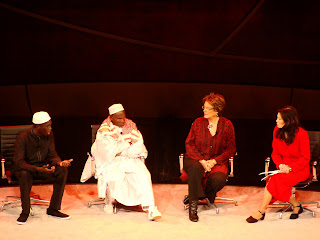 Alongside Tostan Executive Director Molly Melching and Community Activist Demba Diawara, Abdoulie delivered his speech about child/forced marriage and female genital cutting (FGC) with unbridled confidence. He explained, ‘‘No! I did not feel nervous! I believe in what I said and what I have learned through Tostan…. There were very intelligent people there who know what is going on in Africa and who can look for a solution.’’ During his speech Abdoulie captured the audience’s hearts with a personal account of his sister who was forced to leave school early so that she could marry. He highlighted the difficulties families face when trying to finance their children’s education, explaining how economic hardship is often the driving force behind early marriage: ‘‘my sister could not go further than Grade 9. There was no money, so my father did not know what to do…a man came to marry her. My sister still regrets it because she does not have her education and my father realizes his mistake now.’’

Reflecting on the summit and his time in the city, Abdoulie said, “you know, seeing is believing and it was amazing! What I was seeing was like in the screens!” Abdoulie was impressed by everything he saw. When asked if it was difficult to return to Bassending, he commented, “I went to America for a purpose. Many told me not to come back. They said America is a place where everything is okay. If you come back, you continue to suffer. And yes, the place is fine, the place is nice. The roads are big, the buildings are good. I love the place! But I know I must come back. [The Gambia] is my home.”

Abdoulie’s commitment to his community and to his future is remarkable. He plans to become an educator or nurse so that he can help improve the health and well-being of his community. In commenting on the grandeur of New York City, Abdoulie stated, “although we [people of the Gambia] do not have the same resources, if we have education, we can make small changes.” Abdoulie is a wonderfully enthusiastic, committed and considerate young man, and it is without a doubt that he will make changes, big and small, towards the betterment of his community and country.

Tostan Regional Volunteer in The Gambia Lilli Loveday interviews Youth Activist Abdoulie Sidibeh in the second installment of our two-part series documenting Abdoulie’s journey from The Gambia to the Women in the World Summit in New York City.

To read the first installment of this series entitled “From The Gambia to NYC: Tostan Youth Activist Abdoulie Sidibeh to Speak at Women of the World Summit This Week,” click here.