Farba M’bow spent his childhood in Senegal and moved to the United States. His mother, once a participant in Tostan’s Community Empowerment Program (CEP) herself, encouraged Farba to look into jobs within international development. Farba rediscovered Tostan in Washington, DC where he interned as Communications Assistant from September to December 2012. Here, he gives a personal account of his journey and how his experience with Tostan has impacted his life. 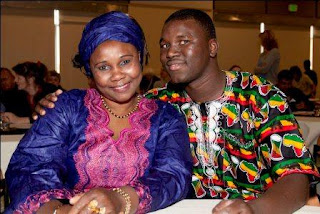 When I finished college, I came back home full of ambitions but not truly knowing exactly what the near future had in store for me. I began a manufacturing job still trying to figure out what to do next. Several months later, I joined AmeriCorps where I provided academic support to at-risk youth at a local high school. The experience was great, and I found myself easily interacting with the students, but I still wasn’t sure if I wanted to pursue a career in education. Then one day my mother suggested that I look into international nonprofit organizations after my time with AmeriCorps. I have yet to understand the reason she mentioned this, but it was exactly what I was planning on doing.

A few months later, out of the blue, my mom asked if I could find her the types of reading manuals that she used to study with in Pulaar back in Senegal and suggested that I search for them on the Internet. Well, I knew that the books she read came from an organization called Tostan and I started my search.

I was immediately drawn to Tostan’s website; seeing the incredible work that Tostan was doing in at least eight African countries was so amazing and very appealing. Then later, I discovered that ‘tostan’ was a Wolof word that meant “breakthrough”. Well, I knew what breakthrough meant in English, but I did not recall using ‘tostan’ in any of my Wolof conservations back in Senegal. I asked my mom, who actually speaks better Wolof than Pulaar, but she didn’t know either. I guessed that it had probably been replaced by a French word during the process of colonization. I went ahead and continued searching.

I forgot all about the reading manuals I was asked to look for and started a search of my own. I felt the urgent need to delve deeper into Tostan. I watched every video that I could find and read every article about Tostan. Then one day, I came across a video of Molly Melching explaining the word ‘Tostan’! I listened thoroughly to the point where she explained the meaning of the word as “the hatching of an egg”. Then it hit me! I picked up the phone and explained it to my mother and she went on to say, “Oh yeah, now I remember what that means.”

The analogy of Tostan as “the hatching of an egg” made perfect sense to me. Putting this into context, I knew from personal experience that many women and children hide their opinions because of social and cultural norms and expectations. I was automatically reminded of the example of a girl who gets married at the age of 14 and is forced to live in a confined village of only a couple of hundred people with all the societal and cultural components that come along with this situation. The only way that person can overcome her difficulties and rise above social expectations or ‘hatch out of the egg’ is through education.

My mother hatched out of her own egg in 2000 when she decided to participate in Tostan classes. She had never attended school before. In the Tostan classroom, they started with very basic skills. She went from putting syllables together to reading themes that we could all relate to at home. My four brothers and I were all eager to help. By doing so, we were also able to read in Pulaar, which is something that the school system in Senegal did not teach students. I particularly remember very entertaining and pedagogical animal stories, such as “The Dog and Monkey Wrestling” and another that talked about health and hygiene and ended with the phrase, “When mom and dad are unclean, there is no way they can raise a clean baby.” As children, we found this very funny but also understood it was true.

One thing we did not fully comprehend, however, was just how important the impact that Tostan’s nonformal education program was going to have on our mother. She put everything she learned into practice. She even went on to expand her business by buying dyed cloth from Mali and selling it back to other businesses. A few years after her experience with Tostan, she came up with the incredible idea for us to apply for visas to the United States. As children, we just needed to attend the interviews and within six months, we packed up all our belongings and got on to the plane to the US!

Years later, inspired by my mother’s story, I kept researching Tostan until I found the volunteer and internship opportunities. With a background in political science and women’s studies, everything that Tostan worked on interested me. I was convinced that this was the type of organization in which I could apply what I studied to the real world. On my last day of service with AmeriCorps, I interviewed for the Communications Assistant position with Tostan and received my acceptance within the same week!

On my first day of orientation, I showed up at the office, rang the bell, adjusted my tie, and patiently waited.  Tostan was everything I expected it to be! The décor on the walls made me think that I was in an actual African community. The pictures of happy looking faces of Tostan participants from African villages automatically reminded me of Tostan’s vision, “Human dignity for all.” I remember thinking that this was the perfect place for me to intern. Everyone at the office was very welcoming. The diversity at Tostan was amazing. From the staff to the interns, everyone spoke another language other than English or had lived in a developing country. I could easily engage in conversation with someone in French, Wolof or Pulaar, and my personal story and that of my mother was well understood.

Working in the Communications Department at Tostan was very rewarding. Every week, we would go over all the activities that Tostan was planning: events, media coverage, and voyages to reach out to the furthest African communities. Tostan’s presence in Senegalese villages that I didn’t even knew existed was proof that community-led development and organized diffusion work. I was stunned to see all the behind-the-scenes activities and the effort, dedication, and cohesiveness the staff contributed so that projects would be completed on time. I was also pleased to discover Tostan’s strategic approaches in terms of changing social norms without harming tradition. Abandoning female genital cutting (FGC); promoting children’s and human rights; establishing social justice; keeping girls, boys, men, and women in school; and reducing domestic violence against women and children in numerous African villages were just some of the momentous results I witnessed while at Tostan.

I finished my internship very humbled to see all that it takes for an organization like Tostan to educate someone like my mother and thousands more women, men, and children. Leaving Tostan’s office with an invaluable knowledge in nonprofit management will significantly impact my professional career. Hatching from a shell of my own, I will bring with me all that I have learned at Tostan on to my future endeavors.