An organization is nothing without the passion and dedication of the team of individuals behind it. Tostan is comprised of talented, committed people ranging from community leaders to organization directors, Community Empowerment Program participants, volunteers and interns to donors and project partners. Each individual contributes his or her unique personality and skills to further the work of Tostan, thus creating a dynamic environment in which positive change can take place.

We would like to highlight the diversity of interests, talents, and backgrounds within the Tostan team here on the blog in a series entitled Voices of Tostan. Specifically, we will explore what brought each unique voice to Tostan and why Tostan’s efforts to bring about positive social change are significant and meaningful to each individual.

We hope that readers, in turn, will share with us what brought them to Tostan and what inspires them. To submit your own Voices of Tostan post, please write to commsassistant@tostan.org. We look forward to hearing from you!

Our most recent addition to the Voices of Tostan blog series comes from John Graves. Mr. Graves has been a global adventurer for forty years, visiting more than 80 countries around the world. He has sailed across the Atlantic and Pacific, driven across the Sahara, Taklamakan, the Rub’ali-Khali and the Namib. He has been an independent financial advisor for 28 years. 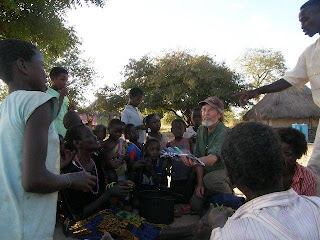 Driving across the Sahel towards the deep desert of the Sahara is a voyage in time, back several centuries in human culture. You survive the desert. The people who live there survive in their own manner. It is a manner quite different from the 21st century lifestyle of comfort and ease many of us enjoy here in the US. Some of us grumble about politics, about the economy, about the price of gas. In the Sahel, the vast emptiness of the sand seas can exact a cruel price on change – survival itself. In this environment we visited incredible villages steeped in time, where customs haven’t changed for many generations. The people are predominantly Muslim. Emerging from the sands of the Arabian desert, Islam spread quickly across Africa. Little has changed in the intervening 1300 years.

Women had a place, a very defined place, in desert communities we visited. I was traveling with a woman, an Australian doctor. We were told to leave – escorted by the gendarme in one instance – from more than one village along the edge of the Sahara in Dogonland in Mali. Why? She, an outsider, was teaching the village women, in French, the health hazards of FGM, female genital mutilation. Everyone, even the women had a strong, visceral reaction to the message we brought. Indeed, the extraordinary lengths to which the women of the villages would go, just to get us to leave, frightened us. At moments it seemed the gendarme was as much protecting us from angry, offended women as evicting us from a tribal hinterland. We were shocked, scared and angry at their reaction.

Upon my return to the States in 1991, I did some research. I had lived in the Middle East for several years, so the culture of Islam was not foreign to me. I had seen many of its faces, or at least those faces exposed partially, willfully, to Western eyes. I knew the limits. We had clearly trespassed. I am not a cultural apologist, accepting every culture as equal – far from it.Yet, I also know to stand back and observe, if not admire, when in other lands, when with other peoples. I also knew that someone, somewhere, might be having success in working on this issue.

My research led me to a few NGOs that worked with the people of West Africa, namely The Peace Corps, The White Fathers, The Nomad Foundation, and Tostan. I gravitated to Tostan. Perhaps a few of the reasons are obvious: my experience, the people, the desert lifestyle, the French cultural overlay. The reasons were deeper. This NGO took matters deeper. They spend three years in a village, melding local teachers into the life there, engendering trust with honest, hard work. They do so with little overhead; an incredibly small amount of what you give goes to administration, particularly considering how much they do, how much they accomplish.

When I married, my wife and I adopted a village, then another. I recommended, along with others, Tostan to the Hilton Prize committee. They eventually awarded it to Tostan in 2007. We have been donors of choice to Tostan, with pride, for many years.

The importance of tithing was instilled in many of us Baby Boomers. We learned it from our parents and grandparents along with the habits of frugality, savings and debt avoidance. Most Boomers live these habits each day.

Tostan does as well. Today they run their Community Empowerment Program, which includes lessons on human rights, hygiene, health and literacy, in eight African countries. For more than 20 years they have affected the lives of millions of Africans to “tostan,’ or ‘breakthrough.’ Using local customs, language and experience the indigenous teachersencourage each community to come forth into its own empowerment. Women’s health and hygiene, pre and post natal care, and education for adults and adolescents are at the forefront of their efforts. Sustainable economic development is also integral to Tostan’s efforts. The Solar Power Projectis an example.

To this end, I have devoted a portion of the sale of my book, The 7% Solution, to be published in February, to Tostan. Fifty percent of the net proceeds from its sale will be given to Tostan and The Ojai Foundation. In addition, the voluntary subscription fee to the website http://www.theretirementjournal.com/ is a simple contribution to Tostan. I have chosen to support their Solar Power Project with a matching gift of $5,000 for subscribers. I hope to build on these gifts with their success.

Note: The opinions expressed in the Voices of Tostan blog series are those of the individual author.