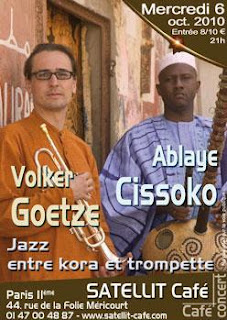 October 6 – I am standing in front of the Satellit Café, a world music bar in the 10th district of Paris, waiting for the rest of the Tostan France team to arrive. I started interning at Tostan France in June, and today, I will have a chance to be part of an off-site event. Volker Goetze, a German friend of the organization, is performing tonight with his Senegalese partner and fellow musician Ablaye Cissoko, and he invited Tostan France to come and present its activities during the break.

Volker plays the trumpet, Ablaye plays the African string instrument the kora, and together they perform jazz music. While I am trying to picture how two such different instruments could fuse into jazz, everybody begins to arrive; that is, the three regular members of the Tostan France office, Sabine, Marine, and Seydou, two volunteers Eric and Makhoudia, two friends of the organization, and Gannon who is visiting us from the Tostan DC office.

Established in Paris in 2007, the Tostan France office was born out of the need to involve members of the African diaspora in the development process in their communities of origin. Through years of experience in Senegal and other African countries, Tostan has learned that members of the diaspora are influential forces that can either hinder or fuel social development. Development in African villages is only sustainable when the diaspora communities are involved in the decision-making process. Tostan France therefore meets the crucial need of maintaining an on-going dialogue between those who have emigrated and those who have not.

Since January 2010, Tostan France has adapted Tostan’s Community Empowerment Program (CEP) to meet the needs of the diaspora in Europe. Tostan France is currently preparing to implement the program in Montreuil and Mantes-la-Jolie, two cities on the outskirts of Paris where a large number of migrants from the Senegalese River Valley and other regions where the Tostan CEP is in place reside. Tostan France also promotes the Tostan development model among European institutions and implements communication projects that connect members of the diaspora with their home communities.

Around 9pm we enter the café and set up a small Tostan France stand next to the ticket booth. Two big pictures with the Tostan logo are displayed on the wall, and brochures introducing the organization and Tostan France bags are laid out.

The Tostan France bags were recently flown in from Senegal where they were made by the women of the Community Management Committee (CMC) of the Keur Ibra Fall village and women at the Community Prison House in Thiès. Both groups participated in the CEP and were trained in fabricating bags as part of income-generating activities introduced during the second phase of the CEP. Tostan France financed the making of 100 bags and currently sells them at public events to give people an idea of Tostan’s activities and to support the women in their enterprise.
Finally, around 9:30pm, the performance begins. Ablaye and Volker, along with their instruments, present an interesting combination of two people from two different parts of the world with two different stories. These disparities gradually wash away as they begin to play. The sound of the trumpet combines surprisingly well with the floating melody of the kora. This is partly because Volker dampens the otherwise piercing tone of the trumpet with a ball of fabric. My thoughts drift and I don’t realize that time passes.

Only towards the end of the set do the men take a short break. Seydou Niang, the Tostan France consultant for the Jokko initiative, is called onto the stage to introduce Tostan and Tostan France. His words arouse the curiosity of some people and a small crowd lines up in front of the booth to ask questions and to take home brochures or a bag as a souvenir.

At the end of the event, while everybody packs up, I begin to think about how all this – the combination of Volker and Ablaye, their trumpet and kora, the fusion of African and European –reminds me of Tostan France, of how it bridges two worlds by supporting Tostan in Africa and establishing a life of its own within the European context. 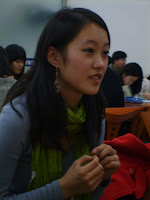 Sun-Min Kim is an intern at Tostan France, based in Paris, and a student in the field of international security. She is interested in development and her time at Tostan France has given her first hand insight into the work of an NGO.