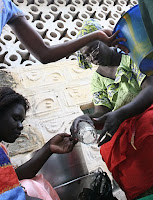 In attendance at last week’s Microcredit Summit was Cheikh Diouf, Tostan Senegal’s Empowered Communities Network Coordinator and microfinance coordinator. Cheikh has spent the past 15 years working with communities at the grassroots level, helping to establish community-led microcredit systems and social microenterprises that generate increased revenues for family expenses and community projects. Cheikh has also led the partnership between Tostan and Freedom From Hunger on the implementation of Saving for Change, savings-led microcredit programs in Senegal. To date, 55 savings groups have been established, reaching approximately 6,000 women with financial resources generated from their own savings and enterprise. Cheikh had the chance to explain to Christopher Dunford and Myka Reinsch Sinclair, President and Vice- President for Programs of Freedom from Hunger, how the microcredit revenues have been instrumental in supporting health infrastructure in Senegal.

Finally, Tostan Mbour’s regional coordinator Aida Mandiang was invited to speak at the panel, “Building on the Strength of Women in Africa and the Middle East: Innovations from the Region.” Aida spoke about her experience mentoring the Federation of Community Management Committees of Mbour. The federation supports a group of enterprises led by women which generate revenue in order to promote healthy behaviors such as prenatal visits, testing for HIV/AIDS, and the abandonment of female genital cutting (FGC). (Image: Salim Dramé: A microcredit venture in Senegal- participants making bissap jam, a local favorite.)