Communities in BRAKNA Join the Momentum for FGC Abandonment in Mauritania 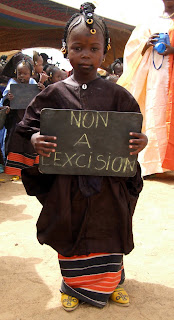 MBAGNE, Region of Brakna, Mauritania, 25 May 2010—For the first time in the Islamic Republic of Mauritania, a celebration to abandon the harmful tradition practices of female genital cutting (FGC) and child/forced marriage was organized by 78 communities in the Region of Brakna.

Held in the town of Mbagne, representatives from the Hassanya and Pulaar ethic groups came together on Tuesday, May 25, to announce their commitment to promote and protect the human rights and health of girls and women. Setting the stage for further FGC abandonment in Mauritania, the communities opened a promising new chapter for women and girls in the region. 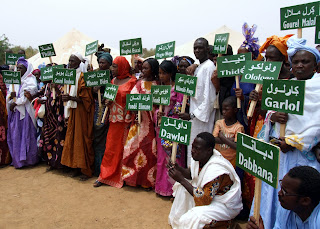 More than 7,000 people gathered at the public square in Mbagne for the day-long celebration. Communities traveled from throughout the region to participate in this historic event in the presence of important government officials such as the Minister of Social Affairs, the Child and the Family, UNICEF representatives and several other non-governmental organizations.

Representing the ethnic diversity of the 78 declaring villages, Majouhb Minti Oumar, a Hassanya participant, Habisatou Seck, the Pulaar Tostan facilitator in Mbagne and Bébé Diop, a Pulaar participant, read the declaration of abandonment in the languages of Hassanya, Pulaar, and French. Through music, dance and a sketch, youth groups highlighted the communities’ reasons for deciding to abandon these practices and the challenges they faced before reaching this momentous day. Important community actors who were crucial to gaining community concensus such as former cutters, religious leaders and community doctors, spoke to the people present and declared their commitment to protecting the human rights of women and girls.

According to the Demographic and Health Survey (DHS), 77.3% of women in the Brakna region have at least one daughter who is cut. Thus, the Mbagne pledge is a significant step and reinforces the Fatwa (religious decree) announced by national Imams of Mauritania at the beginning of 2010. In Mauritania and many Muslim countries, the practice is justified on the basis of religion, however, Islam does not consider FGC a religious obligation. As a result, many authorities in the Muslim tradition have denounced the practice. 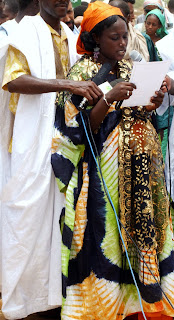 Since Tostan began implementing its Community Empowerment Program (CEP) in Mauritania in April 2007 in collaboration with UNICEF Mauritania and the Ministery of Social Affairs, the Child and the Family, 30 villages in Brakna have participated directly in the program. These communities reached out to an additional 48 villages to share and discuss issues related to human rights, health, hygiene and the risks of FGC and child/forced marriage, organizing awareness raising events and intervillage meetings and debates. This is part of the community-led communication strategy that Tostan calls “organized diffusion.”

The declaration was also an exchange symbolizing unity. Two very distinct ethnic groups, the Hassanya and Pulaar, came together in a collaborative process to organize the public declaration. The Hassanya were in charge of organizing the press panel in Bouhdida held prior to the declaration, and the Pulaar organized the declaration activities in Mbagne. These events unified two cultures that, while living side by side, have at times experienced tension. The event became a common declaration that transcended these differences–demonstrating the power of human rights to unite communities towards a common positive goal.