The Moment of My Inspiration: Molly Melching’s Story

The following is an excerpt from a great article posted on the website Take Part, Inspiration to Action. It is one in a series highlighting international change-makers and the moments in which they dedicated their lives to making a difference. 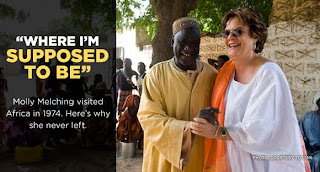 In the fall of 1974, Molly Melching, all of 24 years old, landed in Dakar, Senegal. It was her first trip to the continent, a six-month stint to be spent studying African literature. She had one bag.

Melching had missed a telegram from Dakar, which arrived at her Illinois home just after she had left for the airport. The program had been canceled, it read. She shouldn’t come. As she sat on the steps outside the airport wondering why nobody was there to greet her, Molly Melching had none of the feelings you might expect of a young, stranded traveler. She wasn’t nervous. She wasn’t worried.

“I can’t explain the feeling,” she says now, searching for the words. “It sounds weird, but I felt like I’d come home.”So Melching stuck around. It wouldn’t be the last time she trusted her instincts.

Thirty-six years later, Melching is the founder and executive director of Tostan, a Senegalese NGO that has impacted millions of lives across West Africa.

– From Take Part, Inspiration to Action

Read more about Tostan on Take Part’s website and how the Community Empowerment Program came to be.