Additional Communities in The Gambia begin the Community Empowerment Program and Take Development into Their Own Hands.

I arrived in The Upper River Region (URR) three weeks ago. As a member of Tostan International’s Monitoring and Evaluation Team, my role here has been to train local interviewers and oversee the assessment of 33 communities who are slated to begin Tostan’s holistic education program, the Community Empowerment Program (CEP), in December. The 30-month CEP, which includes modules on human rights, democracy, health and hygiene, literacy and problem solving, will give communities the tools they need to make informed decisions about their own development.

The Gambia is the smallest country on continental Africa with a population of around one million people and a land size roughly that of Jamaica. It is ranked 168 out of 182 countries in the United Nations Development Programme’s (UNDP) Human Development Index, ranking it as one of the poorest and least developed countries in the world. According to UNICEF (2009), 78% of The Gambia’s population practices female genital cutting (FGC) and 36% of all marriages in the country are considered child/forced marriages.  Since 2006, Tostan has been working in partnership with the Gambian government to address these issues. 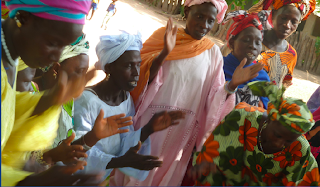 During our training meetings, or “Community Situational Site Studies,” experienced Tostan supervisors interview community members about certain aspects of their village, such as infrastructure, health, education, economy, women’s empowerment, and relationships with other villages. The Monitoring and Evaluation department will use this comprehensive baseline information when evaluating the community-wide impact of the Tostan program.

To date, 80 communities in the URR—the the country’s poorest region—have taken part in the CEP. This month, we will have the opportunity to celebrate alongside over 50 villages as they participate in the country’s second public declaration to collectively abandon child/forced marriage and FGC.