After learning about Tostan’s work partnering with Senegalese penitentiaries, we were thrilled to witness the impact of this partnership first-hand during the observance of African Youth Day at Hann youth prison in Dakar. On June 16, we joined other Tostan team members, prison staff, and notable guests, including the US Ambassador to Senegal Marcia S. Bernicat, in celebrating the day with the 59 teenage detainees of the prison. 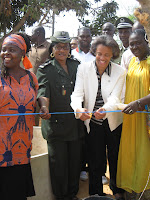 Since 1999, Tostan has partnered with Senegalese state penitentiaries, including the Hann youth prison, in a unique initiative called the Prison Project. As part of this initiative, inmates participate in a condensed version of Tostan’s Community Empowerment Program (CEP), focusing primarily on family mediation, human rights education, and skills training. With this new knowledge and training inmates can more successfully reintegrate into society once they are released

This year’s African Youth Day provided a perfect opportunity for the community to celebrate the progress of the teens at Hann youth prison as they make changes in their lives that will lead to an empowered future. This day-long event consisted of motivational speeches, the inauguration of a well for the prison, and enthusiastic dance performances and wrestling competitions. 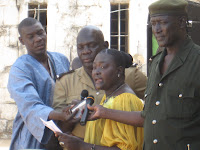 Speaking to the crowd, Tostan Programme Officer Penda Mbaye recalled the sombre origins of the annual celebration: the 1976 march of children in Soweto, South Africa, that tragically ended in 23 deaths. Ms. Mbaye then detailed the progress of the project running in Hann, before closing with the essential point that “the most important resource of any community is its children.”

Other speakers also praised the Tostan program. The Director of the Hann prison, Awa Faye Ngom, lauded the commitment of Tostan to African youth while the US Ambassador expressed her pride in the work of the organization, reserving special praise for Tostan Programme Officer Penda Mbaye and Tostan Executive Director Molly Melching. Concluding her speech, Ambassador Bernicat turned to face the inmates and appealed to them: “Your country needs you: your energy, your ideas, your vigilance, and your participation in the economy and in society.” ﻿ 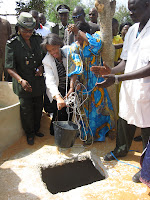 After the speeches, we made our way to the garden of the prison for the inauguration of a new well on the prison premises, the construction of which was funded primarily by a private donor. Ambassador Bernicat cut the ribbon with Tostan Supervisor Aïssatou Kébé at her side.

During lunch, which featured a traditional ceebu yapp dish of rice and meat, we spoke with Marie Nazon, a Haitian-American Fullbright Scholar working on the Prison Project. She stressed the value of the well as a source of clean water. Potable water was a major issue in the Hann facility prior to Tostan’s arrival. Before the well, she explained, the boys wouldn’t take part in sports, as they had nowhere to bathe after exercising.

Ms. Nazon told us that the well will also support the prison’s gardening project, in which inmates learn agricultural skills. She was excited by plans to expand the Prison Project at Hann to teach young prisoners to raise chickens and harvest eggs. Ms. Nazon stressed that learning such skills for income-generation is key to preventing recidivism.

The festivities continued into the afternoon with a traditional Senegalese wrestling competition. Five rounds of fighting took place with commentary by a charismatic prison employee. After each victory, the other boys would rush into the arena to cheer and dance for the winner and even the director of the prison joined in the dancing after the final match. Following the competition, the boys performed a skit, a rap, and a song to entertain the audience

Ms. Ngom brought the African Youth Day celebration to a close with her final, inspiring remarks directed at the teenage inmates: “This is just a phase in your lives. Have confidence and perseverance and you will leave here and go on to live prosperous lives.”

After these strong words, everyone, including the boys, prison guards, and audience members, broke into dance as people exited the performance area.

In the above video, Ibrahim Cissé, the Garden Supervisor, talks about the importance of the well at the prison.