Starting in 2008, Nike Foundation funded the Empowering Communities to Empower Girls project in 55 villages in the regions of Kaolack and Thiès, Senegal. Participating communities took part in Tostan’s 30-month Community Empowerment Program (CEP), and 50 of those communities also participated in additional class sessions that discuss gender roles using gender terminology. This story was chosen by project facilitators and supervisors as the best story among all those written at the Nike Foundation Project’s Most Significant Change workshop in November 2010.

Mariama Diop  was a participant in the Tostan Community Empowerment Program (CEP) in her village, Kantora Diassé, when she became pregnant for the fourth time in three years. This time, she became ill and spent most of her time in bed. Mariama was not able to attend most of the Tostan Kobi II classes on hygiene and health. While Mariama was bed-ridden, her husband and the other members of  the household took over her daily household responsibilities, including caring for her three children. 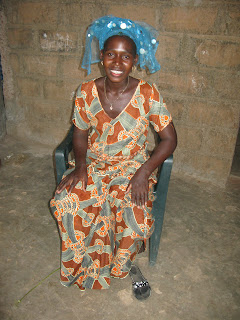 When the time came for her to give birth, Mariama’s child was stillborn. Mariama was devastated, and her health remained poor. Tostan facilitator Ramatoulaye Sène heard about Mariama’s situation and went to visit her at her home. Empathizing with Mariama, Ramatoulaye brought up a previous class discussion topic: using contraception for birth spacing. Mariama was open to the idea, but she was afraid to bring it up directly with her husband, the village Arabic teacher. She asked Ramatoulaye to bring up the issue with him. After Ramatoulaye spoke with Mariama’s husband, Mariama gathered the courage to talk with him herself. When she spoke, he simply listened, offering no response.

After giving birth, Mariama traveled regularly to the nearby town of Nioro du Rip for post-natal treatment. At her next appointment, she asked for a three-month contraceptive injection. When she returned home to Kantora Diassé, Mariama told her husband about the injection she received. Again, he listened without responding.

Since then, Mariama has been going to Nioro every three months for a contraceptive injection. Her husband gives her the money to pay for the injection when she asks. Last time, he even reminded Mariama that it was time to go to Nioro for her next injection.

Mariama’s husband explained that he had been worried for his wife’s health all along, but he was also afraid that contraceptive injections would prevent her from being able to have children in the future. He felt anxious when he noticed that Mariama sometimes did not menstruate every month. Nodding in response, Ramatoulaye gently reassured him that many people feel worried about these symptoms. She explained that it is normal to miss periods when a woman receives contraceptive injections.

Since her last pregnancy, Mariama has regained her health and started an income-generating activity producing and selling soap. She said that she has never done this before, but that she wanted to have some income of her own.

Other community members in Kantora Diassé have discreetly gone to see Ramatoulaye to ask questions about contraception. One man begged her to convince his wife to start getting the injections. He and his wife already have more than eleven children, and it pains him to see his wife do heavy housework while she is pregnant. He knows that having children was his wife’s pride, but “it is just too tough,” he said, shaking his head, “when you have so many children, you lose your strength. It can kill you. I would be happy to have no more children.” 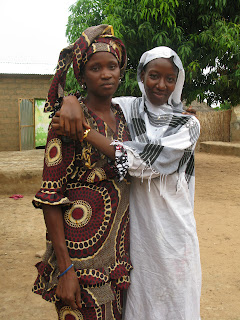 This same man said that he now brings up the subject of birth control with other men he knows. One time, he gently teased a close friend: “You look like a man who has not had sex in a while!” He used the joke as a lead-in to explain how he and his wife can have sex when they want to without worrying that his wife will get pregnant. His friend asked him to convince his wife to start going for contraceptive injections, too.

Fatima Thiam, Head of Social Mobilization for the Community Management Committee, observed that prior to the start of the Tostan program, she was one of only two women in Kantora Diassé who went to Nioro for contraceptive injections. A nurse in Nioro convinced her to start the injections after she gave birth to two sets of twins, three of whom died. Since then, her health and strength are much improved.

Fatima explained that before the Tostan class, “people used to say that you should let a child come – you should not prevent a child who wants to be born from coming.” “Tostan opened our minds,” she said.

Now, Fatima estimates that there are 80 women in the village of Kantora Diassé who go to the clinic for injections every three months. She explained that some learned about birth control methods in class, and each husband and wife who gains experience and knowledge shares it with others. Fatima and Ramatoulaye have each spoken with only a few people, but their efforts have sparked further discussion about contraception and birth spacing. 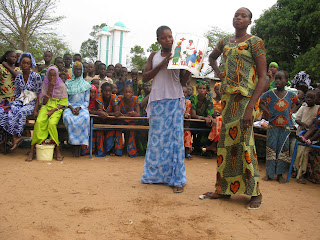 ﻿﻿﻿﻿﻿﻿﻿﻿﻿﻿﻿﻿﻿Still, barriers remain for some community members. Mariama and Ramatoulaye are concerned about the health of one of their friends and think that she would benefit from using contraceptive injections for birth spacing. However, each time they bring up the subject, their friend begins to cry because she does not have the money to pay for the injections. Nonetheless, even the village chief of Kantora Diassé has noticed a significant difference within his community. Before the CEP program, birth spacing was not openly discussed, and most women were afraid to try it or even to bring up the topic with their husbands. Now, using contraception to space births is a common practice in the village, with support from women, men, and traditional and religious leaders.