Bringing Books to Life: Parents in Senegal Learn How to Turn Their Kids into Book-lovers

I returned to Dakar after spending a few days in the village of Keur Simbara, near Thiès, Senegal, where Tostan’s communications and programs teams made a series of six short films for the Reinforcement of Parental Practices (RPP) program, explaining why it is important to read to children while providing parents and caregivers with practical tips on how to read in a fun and interactive way.

The goal is to spread the message that reading to young children stimulates brain development and linguistic competencies, and improves vocabulary, memory and listening skills. It prepares children for learning in school, setting them up for success later in life. It is never too early to start reading to children, as the most critical period for brain development is 0-3 years. Some parents even begin reading to their children when they are still in the womb. From as young as eight months, a baby can turn the page of a book, understand that text has meaning and understand the function of a book. From 11 months, they may even have favorite books.

While in Keur Simbara, we focused on demonstrating how to bring the books to life. This is important for holding a young child’s attention, even more so in contexts where parents might not be fully literate. Parents who can’t read can still use children’s books to describe pictures, build vocabulary, teach them about colors and numbers, make up stories, and encourage critical thinking by asking questions. The key aspect is that the children are exposed to hearing their parents’ voices and the sounds of words. Not only is this a great way for parents to bond with their children, it can also be fun! 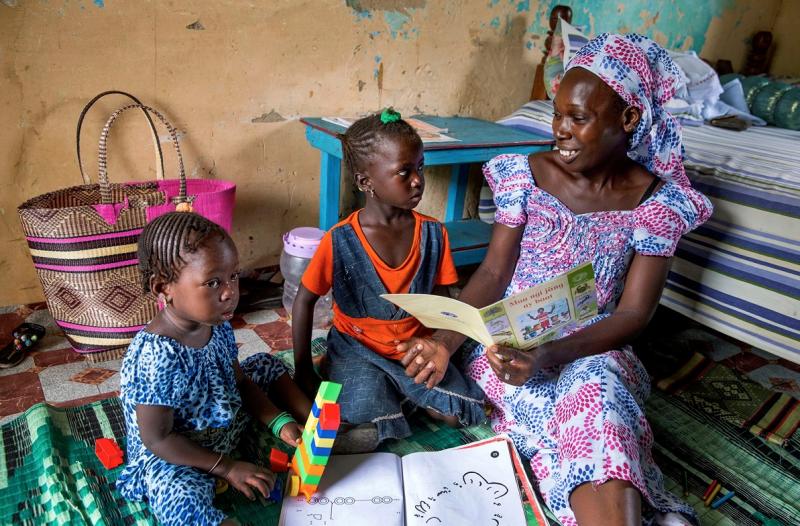 Videos highlighting the link between reading to children and the science of brain development—along with practical tips for how to read to children—have proliferated in recent years on YouTube and other sites, but they tend to be in English and/or aimed at Western audiences. We aim to bring this information to parents all over Senegal, from the urban centers of Dakar to the most remote villages, in the national languages of Wolof, Pulaar and Mandinka. Despite the fact that the language of instruction in schools is French, reading to a baby or young child in any language prepares their brain for learning and lays the foundation for learning other languages. Moreover, in recent years, the Senegalese government has expressed the political will to introduce national languages into the formal education system, and has already begun initiating programs to make this a reality. This makes reading to preschoolers in Wolof and other national languages all the more important.

Upon arrival, we were greeted by roughly 20 preschoolers, all excited and eager to get started. We filmed in the community’s “case des tout-petits,” a preschool housed in a small concrete structure with a baby blue interior. We used a selection of Tostan’s children’s books, which were developed for a Senegalese audience and written in the national languages mentioned. The stories and colorful illustrations feature Senegalese characters in typical Senegalese villages and environments, making them relatable to both parents and children. 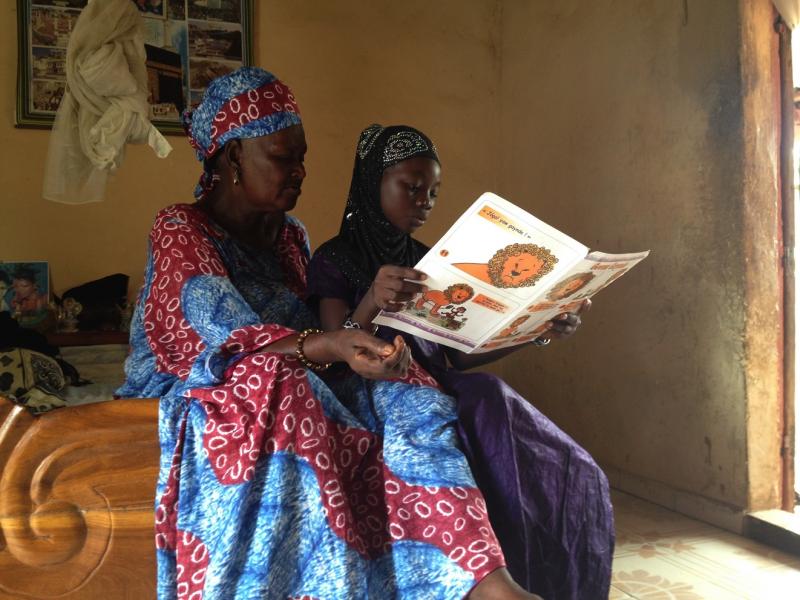 Senior Program Manager Penda Mbaye started off by demonstrating how to animate the book Lëg ak Bukki or The Hare and The Hyena, which is a tale of a cunning hare that outsmarts a hungry hyena and avoids ending up as his lunch! Two of the children performed a short sketch about the book, which parents can encourage to engage young readers and bring the stories to life. One young girl, Coumba, had difficulties growling like a scary hyena, but Penda crouched on all fours and demonstrated a fierce growl, to the great amusement of the children.

After a short break, Mariam, the center’s manager arrived to get the children camera-ready. They were remarkably patient given that we were demanding their full attention for so many hours, which is a testament to the way Penda gave life to the books’ characters and read in an interactive way. She took regular pauses to ask the group questions such as: “What color is this? Yes, it’s blue, good! And who here is wearing blue today?” or asking about items they use every day in their village. When she asked a yes/no question, the group would enthusiastically chant, “deeeedeet!” (no!) or “waaw waaw!” (yes!) in unison, dramatically shaking or nodding their heads.

In addition to developing vocabulary and linguistic competencies, she demonstrated how to use storybooks for fostering logical-mathematical skills, by asking for example, “How many trees do you see in this picture?” Some of the books also carry messages that aim to develop children’s emotional intelligence and focus on empathy with stories such as children learning to include a disabled child in their activities, or the importance of being kind to animals.

Aside from a couple of toddlers who decided to get up and walk around during filming, or provocatively whack their neighbor, the children seemed genuinely captivated by the stories. I noticed that even three of the runaways whose attention spans had finally cracked, had convened in a corner and were enthusiastically leafing through some of the other books.

The trip resulted in some great footage and the films will soon be uploaded on YouTube, shared with national TV stations and children’s centers across the country, and used during training sessions for future RPP facilitators. As we left, the children waved us away with big grins and faces covered in chocolate after enjoying their compensation for a hard day’s work.

The following video was created as a resource for Wolof-speaking communities. Click on the image below to see Penda Mbaye in action as she gives an overview of the importance of reading to children in an engaging, interactive way. This short film features many of Tostan’s children’s books and the various activities that can accompany story time. 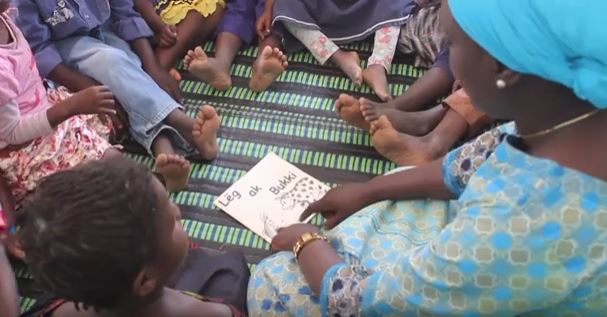