Guediawaye is far off the tourist radar. In this suburb of Dakar, residents live in cramped, spontaneous housing with little or no sanitary infrastructure. Many of them have come from other regions of Senegal in hopes of better economic opportunities.

During the rainy season, flooding is a daily reality here. Mosquitoes breed in the stagnant waters and water-borne illnesses proliferate. Upon arriving in the Medina Gounass neighborhood, I was brought to the water retention basin that the Senegalese government had created in hopes of alleviating the problem of flooding. The wired fencing around the basin had been broken and we saw children playing in the reeds lining the stagnant water.

Through the generous support of the Rapidan Foundation and the Epstein Family, Tostan has been working in Guediawaye since 2008. It’s the only neighborhood of Dakar where our Community Empowerment Program (CEP) is run (though we are running the program in Dakar’s prisons). The 30-month program is now coming to a close, and the 100 participants – all women – are preparing for their future.

I asked Nogoye Dieng, the coordinator of the Community Management Committee (CMC) of Medina Gounass II, whether Tostan’s program had responded to the specific needs of the residents here. 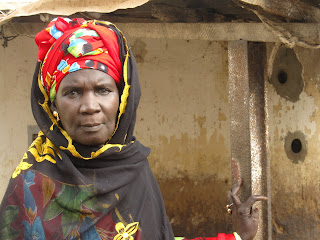 One of the great successes of the program, she said, was ensuring the local children went to school. “Before, people didn’t have papers here. Parents couldn’t sign up their children for school because the children didn’t have birth certificates. Now, when a child is born, his/her parents make sure to obtain papers.” Because of this, she explained, the number of children attending school has shot up. 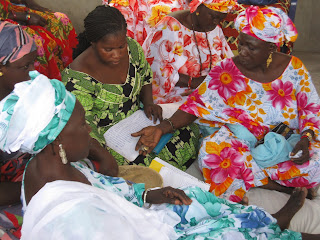 The other success story, she told us, was the establishment of a community fund and the teaching of income-generating activities, including soap making, the grinding of grains, beadwork, sewing and dyeing fabrics. The head of these activities, Marieme Fall, is blind. As the president of a regional association of the blind, she has much experience conducting income-generating activities for the members of her association. She may need help to find her way around, but her sharp wit and her long experience in the field commands a high level of respect among her fellow participants.

﻿The community fund operates on the principle of solidarity, or jappal ma japp. Every Monday and Thursday, the group meets and each member makes a fixed contribution to the fund. The money is then given to one participant, on a rotating basis, and she invests the money in her income-generating activity.﻿
﻿ 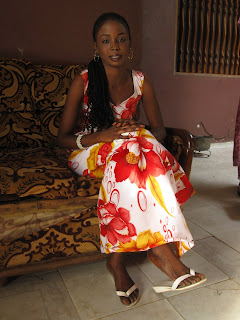 Half of the participants in the program are teenagers and young women. Many of them have come to Guediawaye to work as domestic workers. Awa Ndiaye was one of them. She told us she used to walk in front of the Rapidan Centre on her way to work and was curious to find out more. Now, after attending the program, she can read and write in Wolof. When she goes back to her home village, she said with pride, she can teach her family what she has learned. A fun part of the program, she added, was learning how to use her mobile phone to send text messages.

﻿﻿﻿﻿Today, Medina Gounass is celebrating all that they have achieved over the past three years at a social mobilization event. Music, animations, skits and games are all part of the festivities. A young girl is called up to recite the pillars of democracy. Not missing a beat, she lists all that she has learned in program.

Despite the festive mood, Nogoye Dieng admits her CMC has encountered some difficulties on the way. Storage space for the couscous the women grind is one of them. She would also like official certification from the Institut de Technologie Alimentaire as a marker of quality for the couscous.

What are her CMC’s plans now that the Tostan program is over?