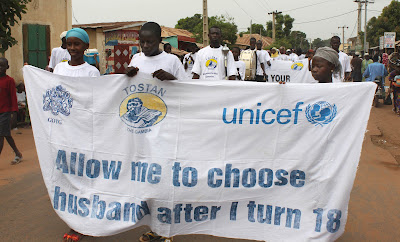 On July 31st, two founding members of The Elders, Graça Machel and Desmond Tutu, brought much needed attention to the global issue of child/forced marriage. Writing in The Washington Post, they called for urgent action saying: “At current rates, 100 million girls will marry as children in the next decade.”

They illustrate the inseparable link between child/forced marriage and the continuance of poverty – when a girl is married too young she is much more likely to drop out of school, experience health complications during childbirth, and can be vulnerable to domestic violence. If she is able to stay in school, she is less likely to experience these negative consequences and more likely to be able to contribute to her community and society at her full potential.

Graça Machel and Desmond Tutu also talk about the hope that exists for many girls worldwide who once faced this stark reality, saying that child/forced marriage no longer has to be an obstacle in their development. Specifically, they mention the transformation that is being led by communities in Senegal – thousands of communities joining together to declare their decision to abandon the practice of child/forced marriage. Many of these communities are direct participants of Tostan’s human rights-based Community Empowerment Program (CEP).

Though positive change is occurring, The Elders reiterate that we all must continue to build momentum for this movement.  By working with communities in Africa and around the world; gaining support from local and national governments; and collaborating with international organizations like The Elders and our partner Girls Not Brides, we hope that the decline of child/forced marriage will only accelerate.

Read The Washington Post article by Graça Machel and Archbishop Desmond Tutu: ‘Early marriage robs children of their opportunities’ on the Girls Not Brides website.