The Element of Faith in the Advancement of Human Rights

I sat in my chair, captivated, focusing my eyes on the strong, but kind Senegalese man to my left and my ears tuned to the English translation of his words from the person on my right.

“Human rights are divine rights,” he said. “It’s man’s relationship with his religion that must be reviewed.”

The man speaking, Mohamed Cherif Diop, Islamic Rights Specialist and Child Protection Program Officer at Tostan, was one of several human rights activists gathered at The Carter Center and Women Thrive Worldwide event in Washington, DC on April 7th. This event, hosted by Sojourners, was entitled “A Dialogue on Faith, Belief, and the Advancement of Women’s Human Rights in Africa” and featured an inspiring panel of traditional and religious leaders and women’s rights activists from Senegal, Liberia, and the Democratic Republic of Congo. Tostan’s Executive Director Molly Melching, Tostan staff from Dakar and Washington, interns, and Community Empowerment Program (CEP) participants from Senegal were all in attendance. 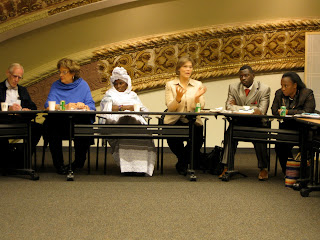 The discussion that day was a satellite event of The Carter Center Human Rights Defenders Forum, which took place in Atlanta, Georgia a few days prior. Both the forum and satellite event were inspired by a speech given by former US President Jimmy Carter. In this speech he called attention to the fact that throughout history many religious leaders wrongly use religion as a tool to deprave women of their human rights. He quotes a statement by The Elders, whom he is a part of, saying, “the justification of discrimination against women and girls on grounds of religion or tradition, as if it were prescribed by a Higher Authority, is unacceptable.”

Stirred by President Carter’s speech and further dialogue at the Defenders Forum, Diop echoed this sentiment at the DC event. Following insightful questions and comments by fellow activists, he made the clear point that human rights are not incompatible with religion, but rather human rights are the very essence of religious belief. He emphasized that human rights are divine rights for everyone, men and women. It is scripture, he argued, that reestablishes these human rights in society, specifically women’s rights, not the other way around. According to Diop, it is the job of men and women to revisit this idea of dignity, equality, and respect taught in scripture and then to use that knowledge to promote human rights in their communities. 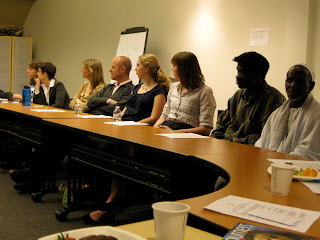 In an effort to raise awareness of this point among Muslims in Senegal, Diop compiled a list of Koranic verses that preach equality and profound respect for human rights, specifically the rights of women. It served as a call to his faith community to reevaluate their perception of the rights of all people.

He finished his comments by saying he and the other activists will return to Africa and will “build a critical mass of religious leaders to show [they] support the rights of women…to say religion does support this.” His words were met with an energetic round of applause, the sound itself symbolizing a call to action.

As I listened to the words of Mohamed Cherif Diop and the other determined and sincere religious and traditional leaders from across Africa, I recognized the truth in their statements. Regardless of which religious belief a person prescribes to, human rights make the foundation of that belief. By making religious and traditional leaders key actors in the movement to advance human rights worldwide, safety, respect, and equality for all people will be within reach for everyone.

To read more about the experiences of other human rights activists who attended The Carter Center Human Rights Defenders Forum click on the links below.