Empowered Women Take Charge of Their Freedom Together at Senegalese Prison

Every year, Tostan commemorates International Women’s Day in one of the five prisons participating in Tostan’s Prison Project where a modified version of the Community Empowerment Program (CEP) is implemented. On March 8, Tostan celebrated this day at the Maison d’Arrête et Correction (M.A.C.) Prison in Thiès, Senegal. Community members, detainees and prison staff all wore traditional Senegalese boubous and taille-bassescreating a festive collage of vibrantly colored fabric. With prisoners indistinguishable from event participants, the atmosphere was inclusive, exemplifying the day’s themes of equality and solidarity. 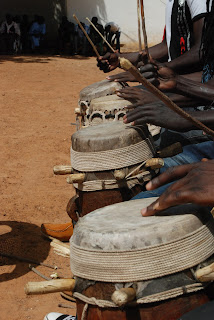 Throughout the day, both male and female detainees gathered to celebrate women by performing skits, songs, and poems promoting human rights. Government officials, prison staff and Tostan representatives joined in giving inspirational speeches on the importance of supporting prisoners with education and vocational skills in order to reduce crime and recidivism.

During his welcoming speech, Prison Director Badara Fall explained that the understanding relationship between detainees and prison staff being witnessed at the event was not unique to just International Women’s Day. This relationship is something they strive for every day. He thanked the Tostan facilitators and prison staff for leaving their homes and families every day to help the women at the prison. Director Fall continued to say that the prison was more peaceful and had fewer fights since the start of the Tostan program. “Prisoners collaborate with guards,” he concluded. “There is cooperation in the work place and support between prisoners and guards.”

Beathrice Ndione, a guard at the M.A.C. Prison, explained how celebrating International Women’s Day at the prison provides detainees with much-needed moral support:

“[March 8th] is a day to open the prison and show solidarity among women. It gives the prisoners confidence to see that people outside still care about them, still love them and are still waiting for them with open arms. Many of these women have been cut off from their families and feel completely isolated from the outside world. They feel like they’ve been rejected. So today is important to show them that they are still cared about.” 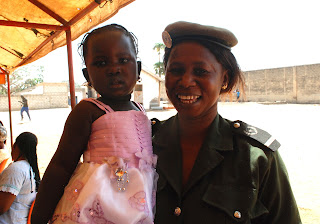 One of these women, Bethel Adeyemi (name changed to respect privacy), moved to Senegal from Nigeria to make money for her family. In 2009, her boyfriend was caught selling drugs, and she was sentenced to five years in prison for association. Bethel is the only person in the M.A.C. Prison that speaks English and was eager to tell her story. She explained that she likes Tostan because the program teaches her French and Wolof as well as marketable skills, such as juice making. Before coming to prison, Bethel did not have the means to support herself financially, and, consequently, she turned to prostitution in order to survive. Now, Bethel believes she has the skills to make money and support herself. Upon her release, she would like to have her own business making juice. She will stay in Senegal but will go to Nigeria to visit her three young children. Bethel’s boyfriend is currently imprisoned in Dakar, the country’s capital. When asked if they will continue their relationship after being released, Bethel laughed and stated adamantly, “No! I don’t want to end up back in prison. I can be alone. I can be free.”

March 8th at the M.A.C. Prison, however, proved that Bethel is not alone. Her amicable interactions with fellow detainees and prison staff demonstrated that she has formed a network of compassionate individuals. Women’s solidarity, the essence of International Women’s Day, empowers Bethel and female detainees like her to achieve their freedom.

Click the image below to watch a short video of the International Women’s Day event at M.A.C. Prison.

Due to Senegalese law and ethical considerations, Tostan has chosen not to publish photos and video of detainees at the M.A.C Prison. All people depicted in the above video are Tostan team members, prison staff, and community members.