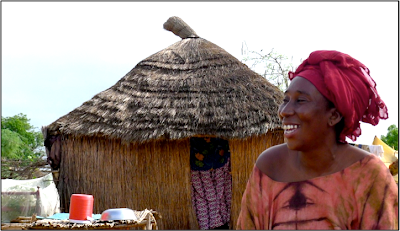 The community of Vélingara is located in the district of Ranérou in one of the most conservative regions of Senegal. In January 2012, Vélingara began Tostan’s Community Empowerment Program (CEP) thanks to one woman, Coumba Samba Camara, who mobilized her community to participate in the program.

As part of Tostan’s community-led outreach approach called ‘organized diffusion,’ it broadcasts radio programs on themes covered during the CEP such as democracy, hygiene and health, problem solving, and project management. These radio broadcasts, which are hosted by Tostan facilitators and participants, allow messages that are key to inspiring community-led development to spread to villages that are not directly participating in the program.

Coumba first learned about Tostan through these radio broadcasts. She was so interested in what she heard that she made sure to be around a radio every time a show was scheduled. As was the case with Coumba’s village of Vélingara, communities that learn about Tostan through the radio often choose to invite the program to their own villages.

Serving as a member of the Vélingara’s Rural Council, president of the local women’s group, and treasurer of the women’s dairy collective, well-respected Coumba was able to convince her peers of the benefits of participating in the Tostan program. When she learned that Tostan was working in her area, she arranged to meet local Tostan staff to get more information and encourage them to hold an information session in Vélingara.

Through this process of bringing the CEP to her village, she also became involved in Tostan’s awareness-raising and social mobilization initiatives. She began to accompany their local team on trips to many nearby villages in order to share accurate information about harmful social norms such as female genital cutting (FGC) and child/forced marriage.

Since January 2012, when her village began CEP classes, Coumba shares that communication and decision-making in Vélingara has already improved. Regular village-wide meetings are now held, and community members are demonstrating their commitment to community-led development through village clean-ups, increased number of health visits, better collaboration with local authorities, increased community solidarity, and a new freedom of expression for women and adolescents.

Coumba is now a member of Vélingara’s recently formed Community Management Committee (CMC), and she works with her community to identify cases of human rights violations and take action to ensure that the human rights of every community member are respected. Coumba is a dynamic and active leader in her community, eagerly learning and sharing the new skills and knowledge from CEP classes. With this energy, she will continue to empower her own community of Vélingara and beyond.