Portrait of a Leader: Oumou Ndiaye

It takes initiative, innovation and courage to stand up and say,”What we are doing is not working.” It is assertions like this one that changed the village of Mboss in the Kaolack region of Senegal when the women’s association decided the time had come to change their leadership and approach. 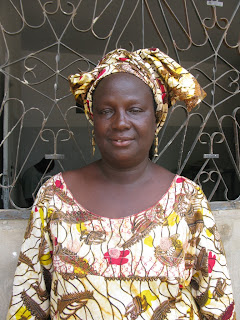 Oumou Ndiaye was one of the assertive women who decided things needed to change in her community. After joining the village’s Community Management Committee (CMC) in 2009, Oumou started to realize why the local women’s association had become inactive. The group was run in a top-down approach with members following the leader’s decisions without question or discussion. Oumou recalled feeling that while the women’s association had been in existence for 20 years, “it was sleeping.”

As community members participated in the Tostan Community Empowerment Program (CEP) classes, an idea took root: in a democratic society, every voice matters. One woman in the association explained, “Before, we did not have the confidence to speak up…we thought, ‘Well, the association president is an elder, so we should follow what she says.’ Now, we know that we each have our rights, and it is our responsibility to speak up and participate in the decision-making of the association.”

Inspired by this idea, women in the community realized it was their responsibility to fix a broken system and begin leading the women’s group in an open, accepting and empowering way.

Fortune would have it, Caurie Microfinance, a close collaborator with Tostan, expressed interest in implementing a microfinance initiative in Mboss. This opportunity emboldened the women’s association to turn their calls for change into action. The women knew that in order to properly manage any loans granted by Caurie, the group’s leadership would need to be refreshed and community enthusiasm for the association would need to increase.

In November 2010, the village chief, also a member of Tostan’s CEP classes, learned of the women’s desire to change association leadership. He called a meeting of association members, facilitating a nonthreatening atmosphere for a discussion to take place. It was at this meeting that the women diplomatically and democratically elected a new leader: Oumou Ndiaye.

Under Oumou’s leadership, the women’s association changed the way they managed money and thus enabled the group to increase their level of engagement in their community’s economic growth. They invested their finances in income-generating activities, transforming their formerly stagnant resources into a profit source.

“We did not know how to put our money to work,” Oumou explained. “Now, we have used that money to buy chairs and cooking pots that we rent out for celebrations, and the money from these rentals goes back into the women’s association’s fund.”

Mboss was one of two villages selected to receive funding from Caurie. Through the initiative, each woman in the association received a loan of 50,000 CFA (approximately $110 USD) to repay over six months. To support the women, representatives from Caurie visit Mboss each month to work with the loan recipients and increase their understanding of financial management.

“Before, we didn’t know what was going into our association fund, what was going out, and what was left,” Oumou said. “Now we get together and talk about these things so that everyone in the group knows. We document this by writing it down.”

Despite her role as the president of the women’s group, Oumou has not become attached to the power of her position. She constantly reaffirms the idea that every five years, leadership should be changed, regardless of whether she is re-elected to the position.

“The women’s association leadership had not changed in 20 years, and now we know that that is not the way an association should be organized,” she asserted. “In five years, we should refresh the association’s leadership again.”

Oumou’s commitment to involving all members in decision-making directly aligns with Tostan’s inclusive approach to community-led development. Through open dialog, these women have taken progressive, ambitious steps for the betterment of their community as a whole and for the ideals of democracy.

Following the success of the women’s association microcredit initiative, international development organization Freedom from Hunger is now exploring the possibility of implementing a youth microcredit program in Mboss. Following the display of initiative, courage, and ingenuity of their mothers, enterprising youth are now taking a larger role in their futures. The women of Mboss not only acted as inspirational figures to other associations, but they are influencing their children’s actions and aspirations as well.