Portrait of a Leader: Yama Bathia

A few years ago, Yama Bathia experienced gender-based violence in her own home. Since that day, she has worked hard to create a safe space for problem solving in her community of Bougnadou Manjaque and to challenge harmful social norms, such as female genital cutting (FGC). On a recent visit to Bougnadou Manjaque in the Sédhiou region of Senegal, Tostan Social Mobilization Agents (SMAs) spoke to Yama personally about her experience with violence and how that has shaped her perspective of FGC. Yama agreed to share her story in hopes of raising awareness about gender-based violence and educating others on the harmful consequences of FGC.

Yama: One day during winter, after the rains came, I was cultivating rice in a field five kilometers from our village. I left my infant daughter with my husband while I worked in the fields. There was so much work that day – the work was hard – and I had to walk all the way back. So I arrived home late, around 7:00 pm. My daughter was crying because she was hungry and had not eaten since before I left. I went outside to wash before feeding my daughter when my husband found me, and he was very angry. He hit me several times but my family heard and was able to intervene and stop him.

A few hours later I was still very upset, but asked my family to help organize a meeting between my husband and me. I first spoke to my husband, and he explained that he was angry at me for leaving our daughter without anyone to breastfeed her. I told my husband I was sorry, but that in the future we should discuss our problems respectfully. If we can’t resolve them, we should ask for help from someone in the village but violence can never be a solution.

SMA: What happened after this incident occurred? Has there been any violence in your community since then?

Yama: After this my husband apologized, and it has never happened again. We talked about violence, especially against women and girls, in a large community meeting. We all agreed that violence is never acceptable and that we would try to make a space where people can go to discuss and resolve their problems. Sometimes they talk to their family, an imam, or the local village council, and sometimes we talk together as a community. I don’t think any other women have experienced violence since then. Our village is small so everyone knew what happened to me, and I think it changed the way people address conflict. It made people realize that violence is never a good solution and that violence against women is something we cannot accept. 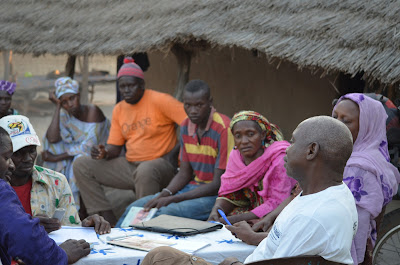 SMA: How does this relate to FGC? Do you see that practice as a type of violence?

Yama: Yes. After the incident with my husband we talked more about violence in our community, and I thought a lot about violence against women. I realized that FGC is a type of violence, especially against girls. They do not consent to undergo this practice, and they have no choice in being cut. I know this practice is very old, it is not a part of Islam, and we see now that it causes serious health consequences. We had some health problems in our village with girls who were cut before, but we ignored them for a long time. Since our community has started talking about violence, especially violence against women, it has been easier to discuss FGC. Also, as we participate in Tostan classes, we’ve really started to understand how FGC is a violation of human rights and how it blocks our development. Our village has decided to abandon the practice completely, and I hope that other villages will follow.

SMA: What would you say to others who practice FGC?