Tostan in an LA Times Op-Ed about FGC 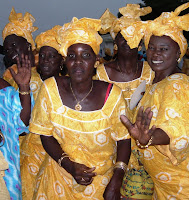 Tostan is highlighted in a Los Angeles Times op-ed about female genital cutting (FGC) and the American Academy of Pediatrics (AAP) reversal of its April 26, 2010 policy that suggested American doctors be allowed to perform a “nick” as a symbolic procedure.  The article references the wide-spread movement in West and East Africa in which communities are abandoning FGC in order to protect the human rights of women and girls. To date, over 4,000 communities have publicly abandoned FGC after either completing Tostan Community Empowerment Program or interacting with other communities who have worked directly with Tostan. Also highlighted is Tostan’s belief that respect for human rights and responsibilities leads to many positive outcomes in addition to FGC abandonment: girls’ education and women’s involvement in small businesses and the economy.

Tostan in an LA Times Op-Ed about FGC