700 Villages in Kolda, Senegal Declare Their Abandonment of FGC and Child/Forced Marriage 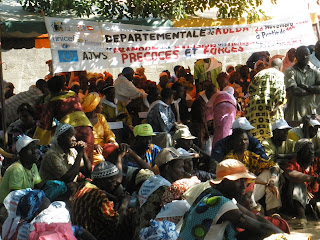 Over 3,000 people gather in the school yard. Community Empowerment Program (CEP) participants, government officials and delegations from Guinea Bissau, The Gambia, and Mali, as well as representatives from 700 communities in the Kolda region of Senegal take their seats. I hurry to find a place in the shade of an enormous tree and sit, propped up by ancient roots. The crowd is a rainbow of color, spilling out onto the dusty ground, painting the day.

This event, complete with speeches, dances, and inspired musical performances, marks a historic change in the lives of thousands. In one of the largest public declarations the country has seen since the movement began in the village of Malicouda Bambara in 1997, communities declare their abandonment of harmful traditional practices such as female genital cutting (FGC) and child/forced marriage. Today, communities call for an end to practices that have undermined the rights of women and girls for centuries, and add their voices to the abandonment movement. A national action plan adopted by the Senegalese government looks to have the practice of FGC completely abandoned throughout the country by 2015; the thousands who have gathered today in a grand display of solidarity make it clear that this goal is within reach. 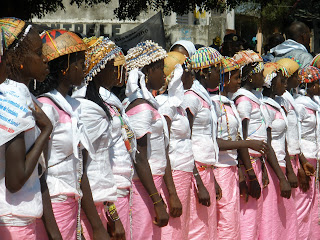 50 young performers from local villages sing and dance for the crowd, expressing through song the harmful consequences of both FGC and child/forced marriage. Thanks to the CEP, Tostan’s 30-month human-rights based education program, communities come to understand the negative effects of certain social norms and are equipped to make their own decisions regarding change.

Tostan originally implemented the CEP in 23 villages in the Kolda region. Through impressive awareness raising activities conducted by each village’s Community Management Committee (CMC), a group of 17 elected leaders who handle everything from awareness raising activities to microcredit loans, 677 more villages learned about human rights and joined the movement to abandon FGC and child/forced marriage. 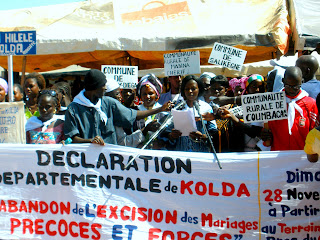 The declaration text is read to the gathered crowd in three languages: French, Mandinka, and Pulaar. Delegations from Mali, Guinea-Bissau, and The Gambia have arrived to attend the event and show their support for Tostan and for the movement to abandon harmful practices.

As the celebration comes to a close, the feeling of excitement doesn’t fade. Dancers in traditional costumes create an atmosphere of gaiety as communities take pride in their heritage and in the human rights education that has led them to this momentous declaration day.

To read more about the public declaration, check out the article from AFP on the incredible Kolda declaration or read the report written by Tostan volunteer Caitlin Snyder.

Find more photos from the public declaration on Flickr!