Back to Where It Began: A Public Declaration in Mbour, Senegal

We talk a lot about public declarations at Tostan, and rightly so. It often takes years of Tostan facilitated discussions on human rights, health and hygiene before communities unite in their decision to abandon female genital cutting (FGC) and child/forced marriage. In the run up, planning and preparation both here in Dakar, where our headquarters are located, and at the regional coordination where the public declaration is to be held, ensures that the event runs smoothly. Everything from the transportation of attendants from across Senegal and beyond to the traditional ceebu yapp dish of rice and meat devoured after the event, is painstakingly organized by participant communities, staff, and volunteers. Due to the nature of Tostan’s work and our mission to support capacity building of those least connected to metropolitan society, this often means these landmark gatherings are in the most remote corners of the countries in which we work.

On Sunday May 8th, a public declaration took place in Mbour, Senegal, where we witnessed 22 communities renounce these harmful cultural practices. The day was deeply emblematic of the new way in which rural villages across the continent are taking the lead in their own development. As Tostan Executive Director Molly Melching highlighted when thanking those present, declarations in this area of Senegal are symbolic as in 1997, the village of Malicounda Bambara, also in the department of Mbour, was the first community to declare its abandonment of FGC and thus laying a path for communities throughout Senegal and across Africa to follow suit. 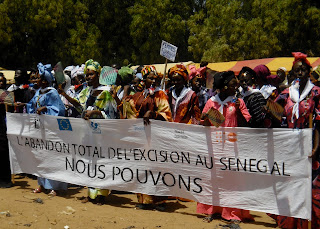 The day of the public declaration started with a lively march that brought a crowd of hundreds through the streets of Mbour to an esplanade in the centre of town where the declaration would later take place. Participants and community members, young and old, filed in and took their seats under the bright canopies that provided shade from the mounting sun. A wave of excitement rippled through the crowds as dignitaries mingled, children played and community members chatted jovially.

During a brief interlude between the long string of speeches, I struck up a conversation with the woman I happened to be sitting next to, Jeatou Njage, a Tostan facilitator. I was keen to ask her what she felt the main benefits of the Community Empowerment Program (CEP) were to the community.

“People had never heard of human of rights before Tostan came to these villages, and communities would never really talk to each other,” Jeatou explained. She went on to tell me that since Tostan’s arrival in the region, this lack of communication and knowledge of human rights has slowly changed, stating, “it was sometimes quite difficult but we helped villagers to talk to each other and us about their rights and their hopes for the future. We were able to talk to women about their rights and their health for the first time. This knowledge became the motivation for communities to abandon [FGC].” 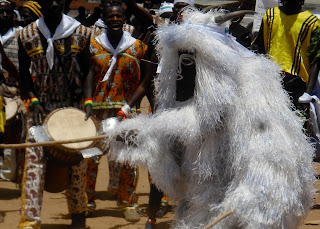 After the speeches, a marching band and group of drummers provided the beats for the singers and dancers as they entertained the crowd with traditional performances. The most impressive of these performers were the extraordinary dancing konkorans. Covered head to toe in long yellow grasses that exaggerate their every complex move, these artists represent a good spirit in Jola culture. The valorization of positive cultural expression and indeed its employment pedagogically is at the heart of Tostan’s approach. Facilitators and communities often use traditional African song, drama and dance as an awareness raising tool as we witnessed in the dramatic sketch CEP participants presented to an eager audience. The performance dealt with the issue of child marriage, as an adolescent girl was encouraged to marry an older man against her will. Her parents insisted she comply with their wish, but this young woman was keen to complete her education and consequently was shunned by her relations. In the end, through family mediation, dialogue and education this daughter came back to her family and happily went on to finish her studies. An eldery man I sat next to cooed ‘c’est bon’ or ‘it’s good’ to himself as the play came to an end and those around us applauded. I felt little could have been more representative of changing attitudes that day than this reception the sketch received.

The afternoon was brought to a close as various community representatives read the declarations in Dioula, Mandinke and Pulaar as well as French, underscoring Tostan’s commitment to local culture in its facilitation of the CEP in national languages.

That Sunday was of course a celebration but more than that, a turning point for 22 dynamic communities who are determined to further the health and development of their daughters and sons alike, for generations to come.

Story by Will Schomburg, Communications Assistant in Dakar, Senegal