Because We are Women: Showing Solidarity on International Women’s Day with UN Women

View more photos from the event in our Flickr photostream!

In the dusty terrain of Guédiawaye, on the outskirts of Dakar, Senegal, hundreds of women and men gathered to mark International Women’s Day on March 8. The atmosphere of the event, organized by UN Women, was one of celebration with musicians, singers, and dancers. I had the honor of participating in the event with other Tostan team members.

The theme of the day was ‘A promise is a promise: Time for action to end violence against women’. Some of the women attending the event carried posters calling for an end to gender-based violence and many others were draped in UN Women banners. While waiting for the speeches to begin, I asked some of them why they had wanted to take part.

Marème Sow had come with a delegation from an organization called COFLEC (le Collectif des femmes contre l’émigration clandestine or ‘Women’s Collective Against Illegal Migration’). Marème represents immigrants in Spain. For many of these women, she told me, gender-based violence is an everyday reality. Later, the president of COFLEC spoke to the audience about how the effects of this violence are not just physical but psychological as well. She shared how women unfortunately receive little support to help them move on with their lives after experiencing gender-based violence.

Khady Ba, the president of the Guédiawaye Association of Disabled Women, came to show her conviction that women living with disabilities have both the same rights and the same challenges as able-bodied women. She said they must work to overcome the challenges they have in common with all women as well as the challenges caused by their disabilities.

Although many of the women attending the event had come in groups as members of organizations, some had come individually. One local woman named Maymana came to show her solidarity for ending gender-based violence because she sees its negative effect every day in her neighborhood.

A large number of excited school girls were also in attendance. One group enthusiastically announced that they think every day should be women’s day, before continuing to chant the day’s theme in French: il est temps de mettre fin à la violence à l’égard des femmes. 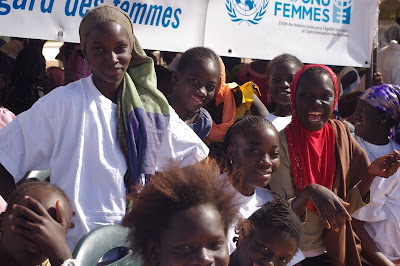 The speeches from government officials as well as prominent members of civil society reinforced the day’s theme. The speakers focused on the fact that gender-based violence continues to be an issue in Senegal despite recent advances in the law. It can happen at home, at work, or in the street. It is not, of course, a problem unique to Senegal, but one that is seen in every country of the world and affects women of every color, of every age, and in every social class.

Despite the differences between the women and girls I spoke to at the event, they all shared one common sentiment: they had come to the event because they recognized that the problems faced by women are universal. They had come, they told me, simply because they are women.