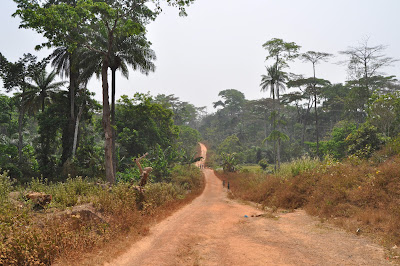 The lush region of Guinea Forestière is always spectacular during the coffee bean harvest because if you take the time to smell the fresh air, the odor of the roasted coffee will tickle your nose and transport you directly in front of a cup of espresso.

On February 5, Tostan Guinea had the opportunity to discuss with the coffee bean producers at a Community Development Grants Project meeting in the community of Gnalakpalé. The meeting brought together all of the Community Management Committees (CMCs) of the zone of N’Zérékoré in order to evaluate the project, which gives small grants to CMCs so that they can lead their own development initiatives in their villages.

The community of Gnalakpalé was chosen as the location of the meeting for its dynamism. Since the last meeting held eight months prior, Gnalakpalé has demonstrated very productive use of the community grants through its activities.

Early in the morning, we were greeted by the village elders offering the traditional ten kola nuts and reciting the phrase “you have left your home, you are home here.”

After greetings and an introduction, representatives from each CMC took the stage to share with neighboring communities how their village used the community grants. This allowed them to learn about the inspiring initiatives of other communities, sharing successes and learning from one another’s mistakes.

The coordinators and treasurers of each CMC currently participating in Tostan’s Community Empowerment Program (CEP) as well as CMCs from communities that have completed the CEP were invited to the meeting.  Former participants were given the opportunity to come together with current participants, several years after completing Tostan’s CEP, to demonstrate that communities remain active and engaged in their development initiatives after the Tostan program thanks to CMC efforts.

Each community benefited from a grant of two million Guinean Francs (approximately $290). Most of the CMCs chose to use the money from the community grant to support agricultural production in the region, such as the production of coffee. At the beginning of the growing season, CMCs give money to farmers who reimburse them in goods, such as rice and coffee, which are then resold by the CMCs at higher prices. This system allows the CMCs to support the farmers who often face financial difficulties when leaving the fields to sell their goods. 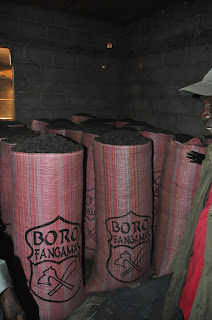 Other CMCs put community grant funds towards a rotating credit system for the community, which enables groups and individuals to lead development initiatives and small business ventures.

In the community of Duola, the CMC has put in place a shared fund, which provides interest-free loans for the purchase of medicine in case of illness. In Tamoé, funds were used to buy school supplies for the recreation center. In Kpoulou, Koakpata, Ouléla, and Komata, roads and bridges were improved, and currently the villages are collaborating on the construction of a health center and an addition to the local school.

The day ended with a delicious meal and a visit to the granary where the CMC of Gnalakpalé stores bags of coffee. The CMC has more than 40 bags of coffee that can sell for upwards of 500,000 Guinean Francs (approximately $70) each. By selling this coffee, they will raise the funds for their most recent development initiative: the construction of a nursery school.