Awa Fall has used her fabric dyeing skills to reintegrate successfully into her family and community since her release from prison. She conducted the training for the participants at Thiès prison, thirty of which were female prisoners and two were female guards. Tostan provided all necessary materials for the training and at the end of the ten days, participants were already able to produce pieces of fabric to sell.  After their release, they will be able to use these skills to provide themselves with an income. 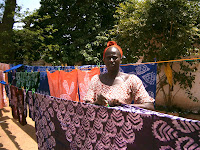 Awa Fall, spent four years in the same prison herself, during which time she took part in Tostan’s CEP, a non-formal three-year education program that covers essential topics including human rights, problem-solving, health, literacy, basic mathematics, income-generating skills, and project management. She also took part in three trainings on fabric dyeing in 2003, 2004, and 2005, mastering the skills that would become her means of economic empowerment and successful reintegration.

Awa was able to start fabric dyeing activities and training to become a fabric dyeing teacher with the help of a 50,000 CFA (approximately $100) contribution from Tostan. Tostan’s Prison Project team also facilitated a family mediation when she was released from prison, encouraging her family to accept and support her. She has since been able to support herself financially and is now married and contributes financially to her family.  Her skills and experience as an ex-detainee made her the perfect candidate to teach these women new skills, and she helped make the workshop a success for all involved.

The workshop participants spent much of the ten days engaged in the practical tasks of preparing, dyeing, and drying of the fabric. Being taught by a former detainee who has since used these skills to help reintegrate back into society very successfully, really resonated with the participants. Feedback from them on completion of the workshop was that ten days was not long enough and further trainings on income-generating activities should be twenty days instead!

A detainee’s ability to provide for herself is essential to successful reintegration into society. Families and communities often are unwilling to accept former prisoners back into their lives, not only because of the social stigma that imprisonment brings, but also because they may require further financial commitment which is an additional pressure on the family and community. 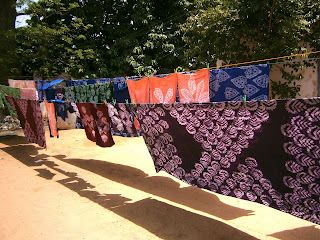 Learning income-generating skills can help solve this, and it gives the former detainee the opportunity to contribute to their family and community, further encouraging social acceptance and a feeling of worth.

The Prison Project team is planning a small fair in the coming weeks that will allow for the display and sale of the products produced during this training. The goal of the fair is to provide economic means for participants while in prison and for when they are released. It will also help demonstrate the economic potential of their new skills to the detainees, as well as raise awareness of this project with communities.

Income-generating trainings will continue throughout 2012: another on fabric dyeing, one on soap making, and three planned on the production and storing of important grains that provide an essential food source for Senegalese communities. We hope that these trainings will continue to empower women financially, such as trainer and former detainee Awa Fall, and help them reintegrate back into their communities following imprisonment.

Click here to read more about income-generating workshops by the Prison Project team.