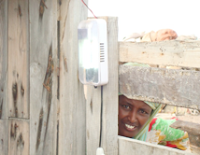 A great change has taken place in the Djiboutian communities of Khor Angar and Assamo thanks to the bravery, determination, and dedication of five outstanding women.

In March 2009, these mothers and grandmothers traveled thousands of miles from Djibouti, East Africa, to spend six months training to become solar power engineers at the Barefoot College in India. Entrepreneur Bunker Roy has been running the college – a non-profit organization pioneering solar electrification in rural villages – for women in India since 1989 and, more recently, in East and West Africa. Since their return in September 2009, the Djiboutian women have applied their training to install and maintain solar panels in their villages, which originally lacked basic infrastructure, bringing electricity to 70 households as well as to local shops and mosques. 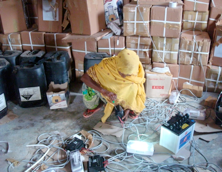 The Tostan Solar Power! Project, launched in 2009 in collaboration with the Barefoot College empowers communities to provide sustainable and low-cost electricity for themselves. Tostan, along with Barefoot College, has supported the training of women from three African countries: Senegal, Djibouti, and most recently, Guinea Bissau. Through training at the Barefoot College, the women are taught to install, maintain, and repair solar panels as well as how to train others to do so, strengthening and spreading the impact of the program. Management committees are created in each participating community to organize the collection of funds from each household in exchange for solar power; through these small contributions ownership of the individual solar panels is established allowing the community to take development into their own hands.

Check out more photos from the Solar Power! project in Djibouti on our Flickr page.

During recent visits to the communities of Khor Angar and Assamo in Djibouti, Tostan staff met with village chiefs and religious leaders to discuss progress and the local successes of the Solar Power Project. Both Khor Angar in the north of the country and Assamo in the south have established enthusiastic management committees. Each committee, roughly 50% women, regulates and records the monthly fees paid by each solar-electrified household. In Khor Angar, 49 households and one mosque are lit by solar energy thanks to the skills of the solar engineers trained at Barefoot College. In Assamo, 20 households and one boutique are now electrified.

Both communities expressed their enthusiasm for the project, emphasizing advantages to the Tostan/Barefoot College approach, including low costs and opportunities to conduct village meetings at night. Community members were also happy to announce that students could now continue their studies well into the evening, that prayers at the Khor Angar mosque did not have to be spoken in darkness, and that villages could remain illuminated after sunset. Beyond these benefits, the five brave, Djiboutian women who traveled to India just over one year ago have become role models and agents of change, bringing home the sustainable solution of solar power to friends, families, and whole communities.