Gambian youth encourage leaders and communities to "practice what you know": Part I

Today marks a very significant event as it is an opportunity for young people to express sincerely the issues that affect us and solicit everyone to give us support, encouragement, and an enabling environment. As a result of the holistic Community Empowerment Program, we are ready, determined and encouraged to do our [utmost] best to realize the outcomes of the good intentions that the government of The Gambia has for the youth of this region.

On October 24, over 170 youth participants in Tostan’s Community Empowerment Program (CEP) marched from the Tostan office to the residence of the Governor of The Gambia’s Upper River Region (URR) in order to bring attention to one thing: their human rights. This visit was the culminating event of the third annual Tostan Gambia Youth Caravan, a five-day event funded by UNICEF. According to Assistant National Coordinator Ansou Kambaye, the objective of the caravan is to raise awareness of “youth rights and the problems youth encounter in their lives” among parents, elders, authorities, and community members. 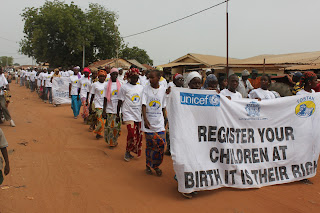 Five days earlier, one could feel the excitement as the youth began their march to Basse.  In each of the five villages they visited along the way, an afternoon ceremony was held, which included opening remarks, speeches from youth participants about human rights, a skit, and closing remarks.  Host community members in each village greeted the six caravan buses filled with participants and facilitators representing 73 Tostan villages with singing, dancing and drumming. An audience gathered under tents for the afternoon ceremony, which commenced with words of welcome from the local imam, Community Management Committee (CMC) leaders, and the president of the local women’s group. These remarks addressed the positive changes in the village since the implementation of the Tostan program. Marième Diambo, a CMC Coordinator in the Serehule village of Parai, attested that the CEP had improved relations among community members, “old, young, male and female,” as well as between villages. “This village is open to everyone,” she concluded, “Tostan is the same family wherever you come from.” 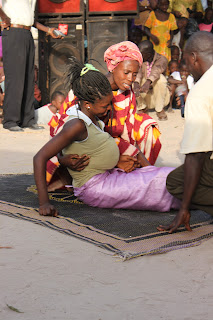 During the ceremony, youth participants spoke about various issues facing young people in The Gambia. In the Serehule village of Sotima, Tida Waaly warned against the dangers of teenage pregnancy—one harmful and common result of child marriage. She urged parents to let their daughters chose their husbands and allow them to marry only after they turn 18. In Parai, Adje Jawne stressed the importance of registering children at birth because of the benefits of having a birth certificate, including the ability to enroll in school and to obtain an official ID and passport. Fordé Sane also warned against the harmful effects of tobacco, alcohol, and marijuana use. She encouraged her peers to avoid drugs and focus on their studies.

Following speeches by youth participants, host community members performed a skit which addressed education and teenage pregnancy. The Mandinka village of Bassendi performed a powerful play about a girl who is seduced by a young man who offers her money. After having unprotected sex, she becomes pregnant. The girl dies in childbirth because her body is not physically mature enough to deliver the baby. While the animated acting during a scene in which the mother discovers her daughter’s pregnancy provoked laughter, the somber funeral song concluding the play clearly drove home the message that teenage pregnancy poses severe health risks for girls. 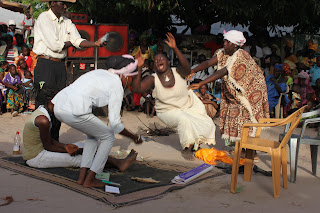 Final words from National Coordinator Bacary Tamba, International Program Officer Mohamed El Kabir Basse, and local authorities brought each afternoon to a close. Mariama Touré, the community health nurse in Parai, stated that the Tostan program compliments government efforts to promote sanitation. She also noted the decrease in the number of cases of teenage pregnancy. Myabi Dramé, the village city chairman, agreed that Tostan has made his job easier. “Before Tostan, it was hard to mobilize people,” he said, “now the [community] meets regularly to organize cleanup days and implement community initiatives.”

Caravan participants and host community members often expressed their enthusiasm for the open communication fostered by the youth caravan. A prominent community leader thanked God that she could stand up and speak her mind to the audience. “Today everyone is discussing issues – youth, elders, men and women,” she shared. “In the past, only men made important decision…now women are involved.” 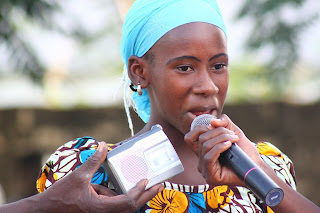 When asked how participating in the caravan had changed her life personally, youth participant Tida Waaly commented that the caravan had given her the courage to talk about taboo topics, such as teenage pregnancy, in front of large audiences. She reaffirmed that she would never have had the confidence to do this before.

At night, host communities held celebrations with dancing, poetry recitations, and cultural entertainment. While the caravan schedule was packed, participants did not lose any stamina after traveling from village to village for five days. On the sixth day, they gathered in Basse, URR’s largest city, with as much energy as they had at the start of the caravan for the march from the Tostan office to the Governor’s residence.

Story by Alisa Hamilton, Program Assistant in Dakar, Senegal, and photographs by Elizabeth Loveday, Regional Volunteer in The Gambia

Click here to read about the youth caravan’s culminating event, the march to the Governor’s residence, in Part II of “Gambian youth encourage communities and leaders to “practice what you know.”’