Tostan Team in Mbour, Senegal Celebrates the Day of the African Child

Paralleling an event held in Dakar that featured performances by famous musicians Youssou N’dour and Baaba Maal, a coalition of NGOs, municipal governments, and primary schools hosted their own event on June 18 in Mbour, Senegal, celebrating the International Day of the African Child. Begun in 1991, the annual celebration is held in commemoration of a 1976 manifestation in Soweto, South Africa, in which thousands of black South African students held a demonstration, marching for their right to education.

Today, the event continues to promote the spirit of the march, calling all African nations to prioritize education for youth. At the Mbour celebration, the Tostan Mbour Coordinator Aida Mandiang and I were honored with a place on the stage, giving us an excellent vantage point from which to witness speeches by representatives from local NGOs and local governments. The audience was treated to theatrical sketches and dance performances by students from area primary schools. 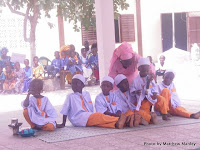 The children of Thionck-Essyl Demand Recognition: an Excerpt from an Article in Senegal’s Online News Source, Le Soleil.

The Day of the African Child was celebrated Wednesday, June 18 in Thionck-Essyl thanks to the initiative of the national coordination of the NGO Tostan which invited delegations from Matam, Kolda, Kaolack, Tambacounda, and Ziguinchor.

This year’s Day of the African Child was themed, “Planning and Budgeting for Childhood: a Collective Responsibility.” In response to the theme of the day, Penda Mbaye, Program Coordinator at Tostan Senegal said, “it has to do with all of the actors involved in the development of African children – parents, the state, NGOs – recognizing the central position of the African child in the overall development of the continent.” According to her, “a concerted policy, something coherent and coordinated with available budgets remains… the only alternative to economic policies which, in many African countries, are showing their limits.”

“If we want the African child of today to be the responsible and well-adjusted African adult of tomorrow… the decision makers of our country should focus on the most pertinent economic choices which take into account the important dimension of the well-being of children,” she concluded.