When looking at the number of villages who have decided to abandon female genital cutting (FGC), over 5,500 in Senegal alone, it’s easy to forget just how difficult it is to shift this social norm. In many villages in Senegal, as in other countries, FGC is a tradition deeply embedded in the culture. Communities that practise FGC may think it is important because it has been done for as long as they can remember, or they may be subject to the misconception that it is a requirement of Islam.

Tostan social mobilization teams address concerns like these in a respectful manner while sharing information on the harmful effects of FGC and, specifically, how other communities in their social networks are choosing to abandon. In partnership with the Orchid Project, the social mobilization team based in the Kolda region of Senegal conducts a 12-day long visit to multiple communities every month. Their goal is to share information and facilitate discussions in communities about human rights and the harmful traditional practice of FGC, as well as the growing movement to abandon the practice. 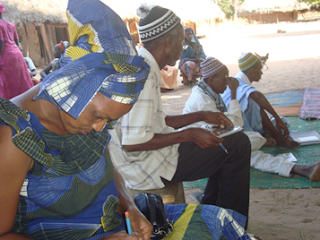 Through this dialogue, communities are able to discuss the harmful consequences of FGC and why other communities like their own are abandoning the practice. Collectively, they are then able to decide for themselves if they want their community to join others in abandoning.  At times this process can be rapid, but most often it occurs slowly as communities build their understanding of human rights and how the practice of FGC hinders the development of their community.

It is critical to get the support and approval of these persons of authority before beginning any meetings with the rest of the community. They are respected voices within their communities and without their consent, it would be very difficult for the team to gather the community and share their knowledge, experiences and information.

At the appointed time on the second day of the team’s stay in a village, the meeting is convened and everyone is invited to participate. The team structures the meetings so that they start out with general information and slowly move into more sensitive topics.  The rationale behind this is that if the team jumps right into discussing FGC, which has been a taboo subject for so long, the community may be hesitant to share because they do not know the team or their purpose.

By transitioning slowly from talking about human rights, specifically those rights of women and children, and moving into violence committed against women and eventually FGC, the community is able to get a sense of who these agents are and what they are trying to accomplish. They are then more likely to feel comfortable enough to engage in a dialogue.

This blog is part of a series on the Social Mobilisation project that Orchid Project funds in support of Tostan’s long term Community Empowerment Programme (made singular). Social Mobilisation is focussed on ensuring the acceleration of abandonment of FGC in Senegal. Teams of volunteers who have already abandoned FGC, called social mobilisation agents, visit and create dialogue with inter-connected communities on human rights and the negative consequences of FGC. Their work aims to spread the message of abandonment and encourage others to join them.

Social mobilisation agents are individual members of the community who have been inspired by their understanding that FGC and early/forced marriage are harmful practices, and are eager to share their own experiences with others. Often, they are religious, traditional or community leaders who are widely respected and well-connected, active, influential participants.

You can find out more about Social Mobilisation by clicking here. If you would like to support this work, please click here.