Gambian youth encourage leaders and communities to "practice what you know": Part II

Story by Alisa Hamilton, Program Assistant in Dakar, Senegal, and photography by Elizabeth Loveday, Regional Volunteer in The Gambia

After five days of visiting communities and spreading awareness about youth rights, the youth caravan buses arrived in Basse for the final march to the Governor’s Residence of The Gambia’s Upper River Region (URR). The theme of the final day of activities, Kalong ka baara or “practice what you know” in the local language of Mandinka, captured the enthusiasm of the young people. They recognized that with their new found understanding of democracy and good governance, problem solving processes, and health and hygiene, came the responsibility to implement that knowledge.  Their hope for the final day of the caravan was to instill that same sense of responsibility within their local government. 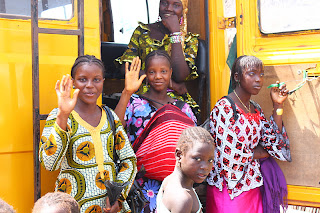 As honking horns announced their arrival, participants spilled out of each vehicle and joined together at the Tostan office. The atmosphere was alive with excitement. Groups of girls in colorful fabric and matching white caravan shirts danced while waiting for the festivities to begin. Nearby Tostan supervisors began organizing people into lines and handing out large banners that read “Allow me to choose my husband when I turn 18” and “Child protection is a responsibility for all.” Once assembled, the group began their march through the town of Basse. Supervisors on noisy motorbikes and a marching band of teenage boys playing The Gambian national anthem led the mass of people along Basse’s main road. Crowds formed on the sides of the street to witness the celebration. 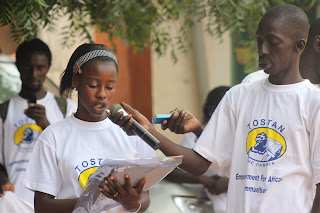 Upon reaching the governor’s residence, those holding the banners formed a large semicircle creating a powerful scene of young faces and written text. They then presented a manifesto. Read aloud in English by Tostan participant Fatou Baldé, the manifesto demanded action and support on the part of community members, local leaders, and government officials concerning unmet rights affecting the lives of Gambian youth. These rights included the right to the survival and development of every child, the right to basic education and access to higher education, the right to employment opportunities, and the right to safe recreational spaces.

Basse’s assistant governor, Mohamed Salu Diallo, responded to Fatou Baldé’s reading of the manifesto with admiration and respect.  Publically to the impressive scene of young Gambians, he confirmed his commitment to human rights and youth rights stating:

Human rights are undeniable rights and should be enjoyed by all, especially the youth who are our future leaders. Your manifesto has outlined key issues on the rights that correspond to the responsibilities of youth and their expectations from the government. We will do our utmost best to support you as responsible youth since you are [the] cream of our future society.

Tostan may have initiated The Gambia’s first annual youth caravan three years ago, but today, children and teenagers are the driving force behind this social mobilization event. 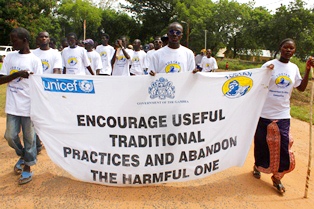 Fatou Baldé best summed up the youth caravan when she explained, “as young people preparing to become responsible future leaders, we are ready to disseminate the knowledge and skills we have gained to our peers and collectively seek the respect of human rights that directly or indirectly affect children and adolescents.”

With the success of this year’s youth caravan behind them, young people in The Gambia’s URR have taken ownership of the human rights introduced to them through Tostan’s Community Empowerment Program (CEP) and today, act independently with a strong sense of responsibility and purpose.

Did you miss Part I of “Gambian youth encourage leaders and communities to ‘practice what you know?’” Click here to read about the community discussions the youth inspired during the first five days of the youth caravan.