As I arrived at Dakar’s women’s prison, any air of formality I expected was instantly swept away as a smartly dressed female prison guard, tapping her feet to traditional Senegalese music playing in the background, smiled and welcomed me warmly. March 8th marks International Women’s Day, an event celebrated annually at the Liberté VI Women’s Correctional Facility through the support of Tostan’s Prison Project. On this day of music, food and dance, inmates come together to celebrate their womanhood and look to their future.

The Prison Project, which began in the city of Thies, Senegal in 1999, has spread to five jails across Senegal. It provides incarcerated women and men with the opportunity to participate in Tostan’s Community Empowerment Program (CEP), which teaches literacy and numeracy skills as well as facilitates discussions on basic human rights and responsibilities. 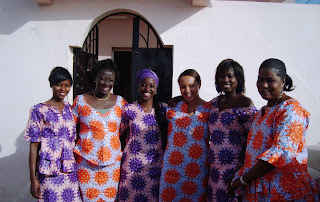 In Senegalese society, incarcerated women are especially ostracized and often rejected by their families, creating serious challenges as the former prisoners attempt to reintegrate into society upon release. When asked what she felt the biggest difficulty CEP participants in the prison faced, Fatou Faye-Fall, the dynamic and passionate Tostan facilitator in the prison, who tirelessly helped to organize the day’s events, responded, “It’s [reintegration] that they are most worried about. Prisoners know there is a lot of prejudice towards them in society and hope for acceptance and stability in their lives.”

Tostan attempts to address these problems by providing vocational training courses that teach prisoners skills such as hairdressing and fabric dying. These skills will help them to gain financial independence and hopefully ease their transition back into society. The project also provides micro-credit finance opportunities to released participants in order to help them start up small businesses and get back on their feet. These loans are often funded from money other detained women make from crafts and fabric sold while incarcerated.

As I entered the canopied patio where the day’s events were to take place, I couldn’t help but notice the swathes of orange, purple, and turquoise garments. Each woman’s outfit was slightly different than the last – some were simple, others were flamboyant and all were very stylish. The director of the prison shared a few words of thanks with the audience and praised the bravery of all women around the world.

Molly Melching, Tostan’s Executive Director stood up next to speak and encouraged the prisoners, especially on this 100th anniversary of International Women’s Day, to believe in themselves and find hope in their futures. That same message was echoed in the speech given by Robin Diallo, the Public Affairs Officer at the US Embassy in Senegal. When I spoke to Robin later I asked her why she thought the event was important, to which she explained, “Women still have so much to overcome to reach true equality, especially female prisoners who are so unfairly stigmatized. We need to not only highlight their problems but also give them hope for the future… And what a wonderful way to do it!”

The wafting aromas of our simmering lunch and the blaring mbalax hits being played on loud speakers inspired the prisoners to jump to their feet and dance. They were soon joined by members of the Tostan staff keen to join them in their celebration. Soon after, the director of the prison, Agnes, reappeared. Removed of her dark green suit, she wore an outfit of the same material as the inmates in a show of solidarity. Agnes jumped to the dance floor, encouraging others to join. Soon, prison guards were dancing arm in arm with others around them until inmates, guards, Tostan staff and other guests danced together, regardless of rank or age, in a wonderful, energetic blur. Hardly anyone by this point could stay seated and even I bobbed along to the great Youssou N’dour.

Following a delicious and highly filling traditional Senegalese lunch we sat back down to watch a variety of dramatic skits performed by the detainees that dealt with issues such as HIV/AIDS and other social concerns. Though dealing with difficult subject matter, they were able to address these issues with humor and flare, to the delight of the audience. At the end of the day, the joyous and eye opening celebration was rounded off by more music, poetry, and heartfelt words of thanks from the inmates.

Story by Will Schomburg, Tostan Communications Assistant in Dakar, Senegal