Crossing Boundaries: Communities From Senegal and Mali Come Together To Declare Their Abandonment Of Harmful Cultural Practices

Located in the far east of Senegal, the Kéniéba zone of Tambacounda region, which leans against the border with Mali, certainly feels far away from cosmopolitan Dakar. It was only after a long, off-road journey through an arid terrain peppered with colossal Baobab trees that we finally arrived at the host village of Gathiary. This community belongs to the minority Soninke tribe with a distinctive language and culture, found primarily in this eastern outpost and across the border in Mali. Visitors to Senegal often praise the country’s hospitality, referred to locally as terranga, and this minority community was no exception– the villagers went to every length imaginable to ensure we were made to feel welcome and comfortable. 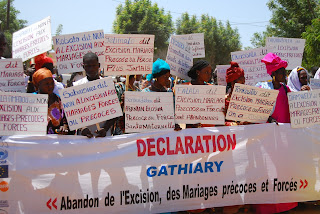 We were in Gathiary as the village was playing host to a public declaration at which eighty-nine communities were to announce their abandonment of female genital cutting (FGC) and child/forced marriage. Of this number, thirty were villages engaged in Tostan’s non-formal, participatory Community Empowerment Program (CEP), which facilitates discussions surrounding human rights and health as well as numeracy, literacy and a range of different issues.

The historic event, as the President of the Rural Community defined it, began a day early, on Friday night, at the neighboring village of Tamé. This community began as an adopted village, benefitting from Tostan’s program through the process of “organized diffusion.” Through organized diffusion, participants from the program in Gathiary visited neighboring villages, including Tamé, to share the information they had learned in the CEP.

This periphery involvement in the Tostan program was not enough for the motivated and determined community members in Tamé. When the Tostan Regional Coordinator visited Gathiary a month after the program had begun, women from Tamé came to see him and demanded that Tostan implement the CEP in their own community, which they consequently received. One year on and determined as ever, the women of Tamé organized a cultural evening of dancing and skits for guests the night before the declaration in addition to the cultural evening planned and organized for the following evening in Gathiary.

The population of Gathiary more than doubled on the weekend of the declaration with village representatives travelling from as far as Mali to attend and participate. The wood fires under the large cooking pots roared all weekend long with women taking turns to fry potatoes or dance in large circles with the adolescent girls whose colorful traditional head dresses gleamed in the roasting sun. 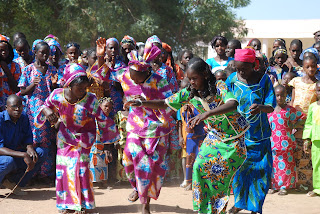 The declaration on Sunday was read aloud in French, Mandinka, Pulaar and Soninke and was followed by a string of speeches given by visiting delegates and community representatives. The local imam of Gathiary, who was instrumental to the community’s abandonment, explained that he was extremely engaged in Tostan’s program, its goals and in the journey that led to this declaration. He also explained that he works to raise awareness in his own community and how he will continue to travel to villages where community members are reluctant to abandon FGC and child/forced marriage. He explained that he will speak with imams and marabouts (traditional religious leaders) and explain his conviction that the Qur’an supports women’s health and fundamentally opposes FGC.

Initially concerned that many participants would not come to this event due its isolated location, the organizers were impressed with the attendance as well as the participation of representatives from the Mauritanian and Malian communities. Upon their departure, the Mauritania representatives expressed their desire to invite the adolescents from Gathiary and Tamé to raise awareness about these issues back in their communities in Mauritania. This landmark occasion proves that while these communities may be detached from the nation’s urban and economic centers, it is clear that these communities’ formidable dynamism will form the basis for their ongoing development.

*Aude is Tostan’s regional volunteer who will shortly be leaving Senegal after spending a year based most recently in the Tambacounda region and was deeply involved in this, her last declaration. William is Tostan’s communications assistant in Dakar.

Story by Aude Muillez and Will Schomburg, Tostan Volunteers in Senegal